I came across this a few days ago from the page of a Facebook friend.  Abraham Hamilton came across evidence that the three foundresses of Black Lives Matter are engaged in "summoning the dead".
Here is the video to which Mr. Hamilton refers.  You can see the women speaking for yourselves.
So are the creators of these videos just engaged in fear-mongering?  From what I've seen from other progressives, this New Age dabbling is nothing new.  Much of New Age is really a rehash of ancient idolatries - and the idols are often demons.  Consider the words of the BLM founders.  They talk of the name repetition as a way of "calling up" those dead people.  Folks, I've never heard of this during any other such demonstration.  When Martin Luther King Jr was assassinated, there were riots galore - but never were there demands that his name be repeated over and over again.  Why now?  Might they be trying to channel the recently deceased?  If so, what they are really attempting to conjure, wittingly or unwittingly, are demons. 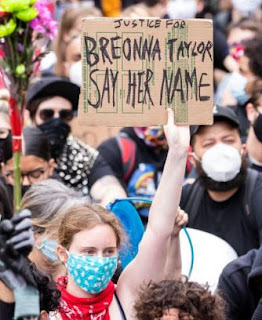 This repetition is NOT harmless.  People who align themselves with Black Lives Matter are literally playing with fire.  The same is doubly true for the Catholic clergy who sympathize with these people.
At least one of the founders is an avowed lesbian.  We know that perversions and the occult are often intertwined.  That seems to be the case here.  Some who are supporting Black Lives Matter should take great care, for they are flirting with grave spiritual dangers.
Restore-DC-Catholicism at 6:50 PM
Share