Two weeks ago some of us broke the story that Baltimore CCHD was funding New Lens and, by extension, their partnership with Planned Parenthood of MD in the promotion of abortion and contraception.  Baltimore-area Catholics were urged in email and robo-call blasts to boycott the collection and to voice complaints to Msgr William Burke, the archdiocesan CCHD director.

He must have heard our complaints for lo and behold, an announcement has appeared in yesterday's Catholic Review.  It's on page A5 and I reproduce it below. 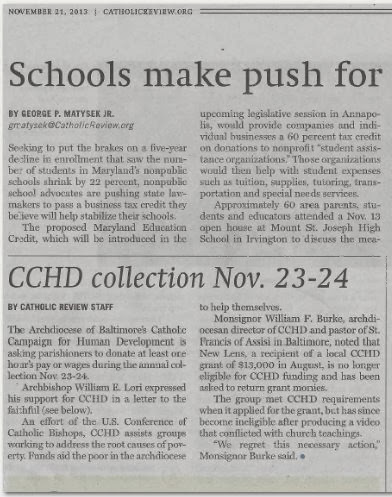 Whew!  Just in time for this weekend's collection, too!  Now all is hunky-dorey, peaches-and-cream with the world!  You can all just dump gobs of money in that second collection, right???

Not so fast!  Look at the article again.  Notice that it said New Lens produced "a video".  Actually it's at least three videos they produced.  Notice too that the Review article is quite cagey with the details of these videos.  There is absolutely no mention of the partnership that New Lens struck with Planned Parenthood of Maryland.  With all due respect to the editors of the Catholic Review, this article is typical "cover your ass" damage-control poppycock, omitting so many details as to render it disingenuous on its face.

Let's be very clear about something else.  The only reason why Msgr Burke "noted that New Lens...is no longer eligible for CCHD funding" is because we melted his phone lines and filled his email box with the irrefutable evidence of the inimical uses that New Lens was making with CCHD dollars.  Had we not raised a hue and cry, there would have been no defunding and New Lens might well have been receiving even more Catholic dollars with which to promote the murders of tiny babies.

The CCHD of the Archdiocese of Baltimore has not acquitted itself of misappropriation of Catholic dollars.  True, it has defunded New Lens - but only because they were embarrassed enough to do so.  By no means am I reassured that their vetting processes are sound - quite the contrary.  I still urge my Baltimore friends not to drop one penny in this weekend's second collection.

We Catholics in the pews can take some encouragement from this episode.  When we raise our voices, complain and - most potently of all - speak with our wallets, we can effect change.  Never think that you don't make a difference.  You obviously did in Baltimore.

It's still recommended that all good Catholics say #no2cchd.
Posted by Restore-DC-Catholicism at 7:33 PM