Sin-Nod On How To Spiritually Murder Our Youth

This so-called "youth synod", more accurately a sin-nod, is showing how literally hell-bent some of our prelates are to brainwash young people (and anyone else) into normalizing the mortal sins of homosexual conduct.  They are becoming more and more brazen about it.

The first ominous signs appeared in the sin-nod's Instrumentum Laboris; I touched on just a few of them here.  Archbishop Chaput pointed out another glaring fault when he noticed the phrase "LGBT youths" in paragraph 197 of the document.  He rightly stated that it is inherently unhealthy for Catholics to define themselves according to sexuality.  I'd add that it is doubly dangerous to define oneself in terms of inherently disordered traits.  What might one say to someone who claims to be a "murderous Catholic"?  Most of us would do a double-take, I daresay.  When LifeSiteNews called out "Bookthief Baldy" on the matter, he tried to claim that the phrase came from a pre-synodal document composed by young people.  LifeSiteNews called him out on the lie (politely, of course).  In other words, Baldy et al inserted that phrase themselves, pretending that they were "listening to and accompanying" the young people.

One of the small groups took up the mantle of gay-shilling, led by Cardinal Maradiaga.  In addition to being another flagrant progressive, he is also de facto leader of the "gang of nine" AND embroiled in some homosexual scandals of his own in Honduras.  They want the Church to "pay more attention to homosexuals" and the "realities they face", such as "marriage and surrogate pregnancy".  This group makes no mention whatsoever of the reality of eternal damnation that looms on the horizon for any practicing sodomite who doesn't repent and make a good confession before he or she dies and is called to his/her particular judgment.

We also heard from a "youth delegate" from Chile who claims to have listened to Catholic and non-Christian youth.  Using the excuse that she heard more from the non-Christians, she completely omitted the input that she received from Catholic youth, as though they should have no voice at all.  The woman's name is Silvia Teresa Morales.  She claims that homosexuals "live their faith within the church".  Big problem!  If people are defining themselves as homosexuals (or racists, or murderers, etc), they most likely are giving way to their disordered drives.  Therefore, they are NOT living their faith.  They have the same rights as all Catholics: to repent of their sins, confess their sins.  No one has the "right" to flaunt their mortal sins and thumb their noses at God Himself.

Some voices of sanity and decency still remain in the Church hierarchy.  In addition to Archbishop Chaput, Cardinal Sarah spoke out, stating quite plainly that the watering down of Church teaching will not attract young people (or older ones, for that matter).  He said correctly that they want clarity

But wait a minute!  It appears that the pope is once again railing at those of us who do hold onto the crystal-clear teachings of Jesus Christ and refuse to let them be obscured by all this "accompanying" jibber-jabber.  Yesterday during his Mass he lambasted us "rigid" Christians.  Again, this is talk specifically designed to shut us up.  One of the sin-nod's small groups took a swipe at Catholic parents who home-school their children.  They fear that these parents might have an "ideological basis".  Well, if they mean that the parents intend to pass on the unadulterated Faith to their children, as they are called by God to do so, maybe that can be called "ideological" but that is by no means to be interpreted in a pejorative manner.

So it appears that this youth sin-nod does have a theme, doesn't it?  It's about contradicting the clear commands of Our Lord with regards to homosexuality, affirming perverts in their mortal sins and making it more likely they'll find themselves in hell.  Why else would the pope wear this?  He's both promoting the gay ideology and profaning the Cross of Jesus Christ.  Please continue with your rosaries by all means. 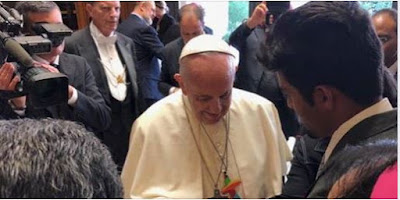 Posted by Restore-DC-Catholicism at 11:55 PM