A Kennedy Makes a Fool of Himself

This time it was Patrick Kennedy's turn to stick his foot in his mouth. The Catholic bishops are opposing abortion funding in the Obamacare bill, and that has aroused Kennedy's umbrage. According to this prince of Camelot, the bishops, by taking this position, are "fanning the flames of dissent and discord." Well, arguably Kennedy is somewhat knowlegeable about being in dissent with respect to the Magisterium. He unfortunately is turning into a bit of a clone of his late father, the rabidly pro-abortion Edward Kennedy.

"If the church is pro-life, then it ought to be for health care reform because it’s going to provide health care that are going to keep people alive," he blathers on. Well, not all people, 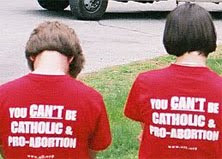 Paddy my boy! What about the people in the womb? What about the people who are seniors and who will have the specter of euthanasia foisted upon them? And who are you to lecture anyone on being pro-life? You know not the meaning of the term for your actions have been the very antithesis of a true pro-life ethic.
Kennedy's bishop, Thomas J Tobin of Providence, Rhode Island, rightly called Kennedy a "disappointment" and called on him to apologize. Good for him. But what the bishop also must do is make clear to Kennedy that he will be refused Holy Communion on his trips home (assuming he attends Mass regularly).
Posted by Restore-DC-Catholicism at 9:04 PM