Queen Of The Nile

According to sources in Atlanta, Archbishop Gregory's former see, his nickname is "Queen of the Nile".  I understand such nicknames are quite common in, uh, "certain circles".  We've had "Donna" and "Blanche".  If history is any predictor, we in the Washington archdiocese are in for a bumpy ride.

By the way - we are being asked to pay for that ride via the "Annual Appeal".  Notice how they won't call it the "Archbishop's Appeal"?  They know very well that "Archbishop's" anything would go over like a lead balloon.  How stupid do they think we are?  Here's the email that I and many others received today. 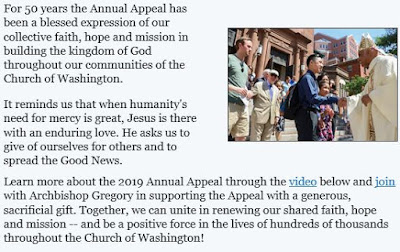 Let's make sure this little balloon goes down with a thud, too.  Just give directly to worthwhile charities without going through these "middlemen" and risking your dollars being diverted to anti-Catholic entities.
Posted by Restore-DC-Catholicism at 11:52 PM

Email ThisBlogThis!Share to TwitterShare to FacebookShare to Pinterest
Labels: Archbishop Wilton Gregory, queen of the Nile