This happened a few days ago as the pope was addressing fellow Jesuits in Mozambique.  Here is the text of the address.  It really is a rambling mess, but the darts against the One True Faith are obvious.

Of course there is the almost obligatory smear against young priests who love their Faith with all its traditions: "Clericalism has a direct consequence in rigidity. Have you never seen young priests all stiff in black cassocks and hats in the shape of the planet Saturn on their heads? Behind all the rigid clericalism there are serious problems. I had to intervene recently in three dioceses with problems that expressed themselves in these forms of rigidity that concealed moral problems and imbalances." 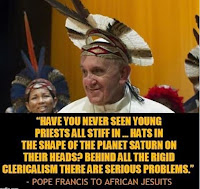 Got that?  According to him, if a priest - particularly a young one - wears a cassock and saturno, why, he always has "concealed moral problems and imbalances" as well as "rigidity"!  Don'cha know?  The pope provides examples in "unrigid" headgear.  Behold the vision to the right!  Isn't that just worthy of emulation?  As an alternative, perhaps those "rigid" priests can get hats just like Gordon Creamer's frilly yellow head -piece!  Maybe I better shut up before I give the pope and bishops any more evil ideas than they already have!

But not to worry!  He "intervened"!  He certainly did with the Franciscan Friars and Sisters of the Immaculate and other orders - intervened them right out of existence!  I pray those poor priests stay strong in their Faith as they face demonic onslaughts from their superiors.

"Clericalism" also features "exclusive moral fixation on the sixth commandment"  "We focus on sex and then we do not give weight to social justice, slander, gossip, and lies".  He's got that precisely ass-backwards.  His topsy-turvy principles are exactly why the Baltimore Archdiocese allows two of its parishes to prance and sashay with the Baltimore pride parades, complete with banners with parish names on them.  Let us recall that Our Lady of Fatima told the children that more souls go to hell than for any other reason.  The late Father John Hardon (one of the few sane Jesuits of the 20th century) pointed out that sins against the Sixth Commandment lead to sins against the Fifth Commandment.  Witness the bloodbath known as abortion.

The LifeSiteNews piece also mentions that the pope referred to an article that deals with an "ecumenism of hatred".  It is true that faithful Catholics have banded together with evangelical protestants to engage the culture for traditional Christian morality.  Among our successful endeavors was the election of Donald Trump.  Let's face it; our progressive cabal in the Vatican and the USCCB despise the President for he is actually keeping his promises.  Perhaps that is what they mean by hatred.  By the way - if you told me ten years ago that I would trust the White House more than the Vatican, I would have thought you insane.  Yet today that is precisely the state of affairs.

Make no mistake about it.  All this talk about "rigidity" and "fixation on the Sixth Commandment" is merely an attempt to prime us for the oncoming attack on Tradition that will occur with the Amazon Synod.
Posted by Restore-DC-Catholicism at 10:44 PM