Our Troops Are Endangered To Fund Kennedy Memorial

After reading this week how our troops in Afghanistan and other dangerous outposts are being stretched due to shortages in vital supplies, I was disgusted to read of the sqandering of $20 million dollars to build some sort of "educational institute to honor and preserve the legacy of the late Senator Ted Kennedy." A particular cause for outrage is that this $20 million dollar earmark is being syphoned from monies that were intended for troop training, fuel and ammunition.

Our troops are in harm's way, and the liberal clowns who run Washington are already hell-bent on cutting them off at the knees by strangling their funding. This nonsense is the brain-fart of John Kerry, Kennedy's fellow pro-abortion "Catholic-in-name-only" senator from Massachusetts. History lesson! In the 2004 elections, it came to light that Kerry considered his fellow Vietnam vets to be murderers. In protest of the war, he tossed his medals over the White House fence - oh, wait! Sorry! I forgot! Kerry tossed someone else's medals over the wall! My bad! 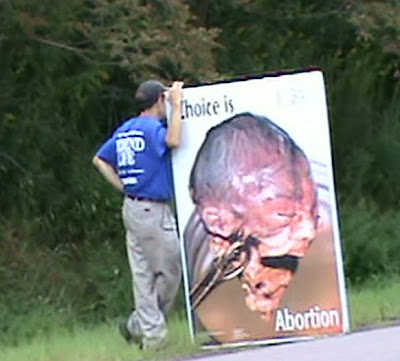 However, if we want to see the real legacy of Senator Edward M. Kennedy, please look to the right. He has, for most of his chequered career, aided and abetted the murder of millions of tiny children, such as this poor little girl shown at the right. This picture was taken on Route 219 in Deep Creek, MD during a Face the Truth Tour on Sept 5th. A state-wide tour occurs in Maryland every summer, orchestrated by Defend Life.

Just think! If you participate in this (and/or other similar efforts), you are not only giving our nation a much-needed wake-up call, but you're helping to display the "legacy" of the late Ted Kennedy. Maybe the feds can sell that monstrosity and give that money back to our soldiers!
Posted by Restore-DC-Catholicism at 6:35 PM