In Most Ladies' Room In Catholic Churches

You will see one of these (see the picture) on the wall.  It is a poster from Project Rachel reaching out to 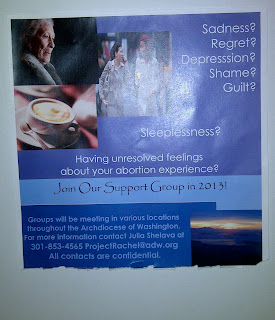 abortion-wounded women to offer them a chance to heal after their horrifying ordeal.  Note the jagged edge at the bottom.  These flyers come with phone numbers at the bottom on "tear-off" strips that women can take to make their phone calls later.  More often than not, I will see these with all the tear-off strips taken.

That fact alone points to the far-sweeping devastation of abortion, with its tentacles ensnaring Catholic women (or someone for whom they care).  While we are all grateful for the efforts of Project Rachel and other post-abortion healing apostolates, we are all in agreement that an ounce of prevention is worth a ton of cure.  There is the Gabriel Network and the crisis pregnancy centers, but more than that we need desperately to hear from the pulpit on Sunday mornings that the Culture of Sexual Permissiveness is to be abhorred.  That means that fornication must be denounced, with people being challenged to behave as Catholics and not wild beasts who haven't an iota of self-control.  Contraceptives are not the answer; they fail and are absolutely useless in regards to STDs.  In fact, more fundamental to contraceptives being "not the answer", they in fact ARE the problem.

The government today has no problem telling people to "just say no" to drugs, drink and even to trans-fats and "big-gulps".  The only reason they don't take the same attitude towards sexual licentiousness is that they want the cash to flow into the coffers of Planned Parenthood and thus to their political bank accounts as well.

So, dear clergy, the onus is on you to preach life-saving truth from the pulpit.  And if you're discouraged from doing so for "fear of hurting women or others", that's not the real reason.  More often than not, the real reason some (even chanceries!) attempt to stifle you is found in the preceding paragraph.
Posted by Restore-DC-Catholicism at 2:02 PM