Election Maps Provide Sobering Lessons For #NeverTrumpers - Will They Learn?

I'm linking now to the election map that was provided by c-span.  One can go to an individual state, click on it, and get the exact counts per candidate for that state.  I have done so for a few states and will post them to illustrate the damage done by third-party candidates (screen shots taken from c-span).  Some of their adherents refuse to acknowledge simple laws of arithmetic; now they cannot ignore the reality before their eyes. 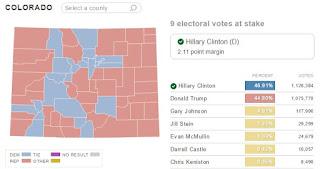 These are all states that narrowly went to Clinton.  In all but one of these cases (I'll discuss VA later), the votes towards the third party candidate(s) amounted to more than the difference between the numbers of votes given to Trump and Clinton.  Since both Johnson and McMullin hold themselves to be conservative, we can guess that had their names not been on the ballots in these states, at least some of those voters would have cast their votes for Trump,  handing to him the electoral votes from those

states as well as increasing his popular vote.

Had this been the situation in more states, we might well be looking at a more bleak future for the United States, as well as western civilization as a whole.  I said in my post on Friday that had this been the case this past Tuesday evening that the #nevertrump crowd might well have to answer for blood on their hands.  On Tuesday evening, God had mercy on the United States. 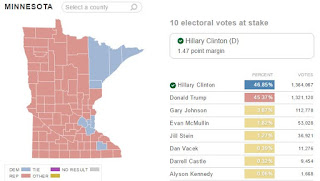 He also had mercy on the #nevertrump folks, sparing them much guilt.

I know some of you are going to whine about this post, asking why we can't just "kiss and make up".  It's very simple; if we don't learn from history we will repeat it - and the next history lesson can well be bitterly devastating.  Even now on facebook some foolish holdouts are still waxing cynical about Trump, seemingly oblivious to the catastrophe just averted.  It 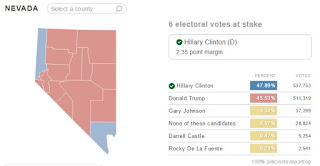 would have been a catastrophe in which they would have had a role in creating with their constant carping on the fantasy of third-party candidates.

Besides the ones who said they wouldn't vote for Trump, there are actually those who stated their intentions to vote for Hillary (see last week's post).  If they are reading this, they know who they are.  To those individuals - please be advised that as far as I'm concerned, any 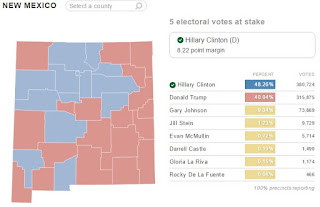 credibility that you may once have had as a former pro-life leader has been forfeited by your doing.  Should I deem so necessary, I will divulge your name.

I promised a word about Virginia's situation.  The total of third-party candidates doesn't quite amount to the difference between Trump and Hillary.  However, recall that back in April, Governor McAuliffe, by executive fiat, restored voting rights to more than 200 thousand convicted felons.  Recalling that McAuliffe was once chair of the DNC, we can guess for whom

these felons voted.  Will Hillary soon be joining their number?
Posted by Restore-DC-Catholicism at 9:01 PM