Temper Tantrums Of The Left 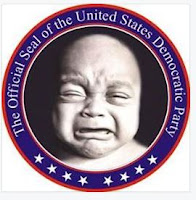 Some precious snowflakes, mainly at college campuses, find themselves "traumatized" by Trump's victory over Hillary.  The administrators of these "institutes of higher learning", are all too happy to validate these temper tantrums since they themselves find their agendas frustrated by Hillary's defeat.  Examples?

There are more such examples.  It's bad enough that we seem to be coddling whining and temper tantrums, but the tantrums are becoming quite violent.  Calls are mounting on social media for the assassination of Trump.  My colleague at Les Femmes put up posts over the past few days of kids being assaulted at school for simply posting their views.  On Pamela Geller's site we see videos of anti-Trump violence being perpetrated by the same bunch that ballyhooed "love trumps hate".  Truthfeed has dug up ads on Craigslist posted by George Soros to gin up the riots that are now occurring.

Some voices of sanity are to be found on the internet.  Reacting to the election, Cardinal Burke said quite plainly in an interview that Trump is preferable to Hillary (#nevertrump people, take note).  Similarly, Franklin Graham posted that "The Lord Saves Us from a Godless, Atheistic Agenda".  He's quite correct.

Now what is the opinion of Pope Francis?  Perhaps the most recent interview with Eugenio Scalfari might offer some clue.  Stating that his main concern is "refugees", he opined that "it is the communists who think like Christians. Christ spoke of a society where the poor, the weak and the marginalized have the right to decide. Not demagogues, not Barabbas"  He evinces (once again) his disregard for the statement of Pope Pius XI, "no one at the same time can be a good Catholic and a true socialist."  Moreover, I fail to detect any corroboration for this statement of the pope when he said that Christ spoke of a society where the "poor" and not "demagogues" can "decide".  Who are the poor versus demagogues and what is being decided?  What are the Scriptural references?  Is the pope being intentionally nebulous?  One Peter Five has good analysis.

I glean from all this that the pope doesn't share the opinions of Cardinal Burke and the faithful Catholics who helped propel Trump over Clinton and perhaps saved the United States and western civilization from irreparable harm.