Revisiting The Vote For Romney 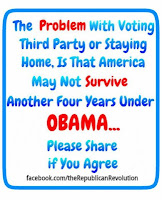 Last month I posted my opinion on why we Christians need to vote for the GOP candidate in November; presumably that is Mitt Romney since he now appears to have the delegates to vote for him at the GOP convention.  I now commend to your reading an article that appeared in American Thinker this past May entitled Obama's Second-Term Transformation Plans.

To those who think that there's no difference between Romney and Obama and that it will suffice just to vote for Congress, I highlight this statement from the article: "Many Republicans and conservatives dissatisfied with the prospect of Mitt Romney as the nominee for president are instead focused on re-taking the House and Senate. That goal, while worthy and necessary, is meaningless unless Barack Obama is defeated. The nation is not dealing with a person of character and integrity but someone of single-minded purpose and overwhelming narcissism. Judging by his actions, words and deeds during his first term, he does not intend to work with Congress either Republican or Democrat in his second term but rather to force his radical agenda on the American people through the power he has usurped or been granted."

I realize there may be much visceral disdain for Romney.  However, please realize that the casting of your vote does not merely signify approval of the candidate for whom you vote; such view of voting is simplistic as it does not consider all ramifications.  For instance, one may vote for one candidate to deny another candidate who is less acceptable.  It is licit to "vote against" as much as it is to "vote for".

To those of you inclined not to vote or to go "third-party", I urge you to soberly consider the arithmetic results of such actions.  Please think and disregard the "gut-instinct".  Cool logic is needed now, not emotional reactions.  Will the country survive four more years of Obama?  I think we all know the answer to that.  If he is reelected and you did not cast your vote for the GOP candidate, you will bear some responsibility for that.
Posted by Restore-DC-Catholicism at 7:47 PM