How To "Terrorize" Without Really Trying

We discovered how to do so - quite inadvertently - while we were in front of the Planned Parenthood death center in Silver Spring MD.  At the moment of this "discovery", there were a number of us on the sidewalk - pro-life activists, pro-abortion deathscorts and sundry building visitors.  All was calm, there was no particular agitation of note - at least to me.

Someone who drove by the north side of Spring Street was somewhat flustered, as he yelled out "Terrorists!" from his car window.  Wondering if he beheld something I couldn't see from my vantage point, I crossed the street to see if I could discover the cause of his alarm.  This is what I saw: 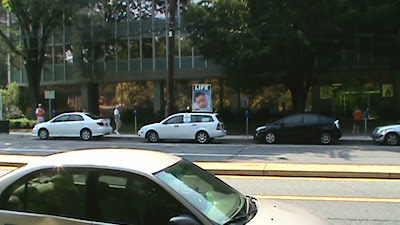 At first glance, the scene looks like what I described in the preceding paragraph.  But wait!  What is that picture on top of the car?  Why, yes!  Indeed it is the object of that man's obvious fright!  I zoomed in for a closer look and post it below.  Ladies and gentlemen, if and only if you have the courage, I invite you to view the horrible visage for yourselves - but be warned!  If it caused that man to accuse of being terrorists, why, it must be frightening indeed!

Are you really brave enough to sneak a peak?  OK - but don't say I didn't warn you!  You better have your smelling salts handy because here it is! 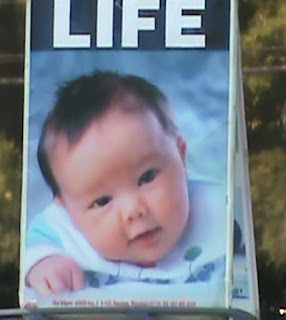 Now that we've all sufficiently recovered our senses after what must have been the most terrifying moments in our lives to date, let's consider a few things.  If that man was an Obama fan, that is, a Minion Most Mindless of the Messiah Most Miserable, he will be of like mind with the mental midget who said that he wouldn't want his daughters "punished with a baby".  In other words, they hold the warped view that babies are things to be avoided at best - and even torn to shreds if they dare to exist at times deemed inconvenient.

Of course it's no secret that those who are depraved of conscience (and that includes all who deem themselves "pro-choice") will always find the proclamation of the truth to be a dire threat to their own cocoon of self-deception.  No sane, rational person could look at the picture of that sweet baby and have the word "Terrorists!" bleat from their mouths.  However, no person who calls themselves "pro-choice" can be called "sane" or "rational" for they permit, if not outright support, the wanton murders of innocent babies.

The real terrorism is what happens inside Planned Parenthood and the other execution chambers commonly known as "abortion clinics".  The silly antics of that drive-by shouter and too many others will never obfuscate that truth.
Posted by Restore-DC-Catholicism at 9:10 PM