Today between 9:45 and 10:00am, on a street corner near the Planned Parenthood where we offer Christian witness, a guy took extreme umbrage with that witness and tried to steal the sign pictured at the right.  We can only assume that when the truth hurts, it really hurts, especially when the one in discomfort does not welcome the truth at all.  In the name of progressive "tolerance" and "respect for diversity", he tried to steal the sign.  When I noticed the incident, he had the sign tucked under his arm.  We called out to him; one of our group called the police and I pulled out my camcorder.  He or his girlfriend (I suspect the latter) had a grain of common sense and let go of the sign by the time I turned on my camcorder.  The rest is apparent in the video that now follows.  Click here if you cannot see embedded video. 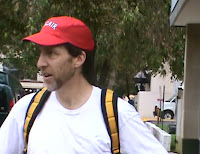 I realize it's probably difficult to make out the perpetrator, since it seems that these "clinic defenders" felt they had to protect a thief and vandal in his misdeed (more on that later), so here's a still-shot.


He and his girlfriend walked away as we delivered them some well-placed rebukes.  He turned as though to come back, but it appeared that his girl friend restrained him as she took his arm.  I wonder if she's proud of her knight in less-than-shining armor?  Here's a still shot of the charming couple. 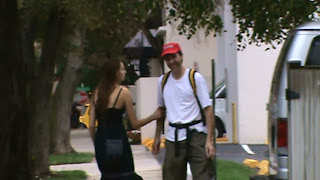 Now let's get back to this escort who attempted to block my camcorder.  His orange vest identifies him as an operative of the Washington Area Clinic Defense Task Force.  This bunch has their own web site.  On it is stated their goals.  Don't they sound oh-so-noble?  It sounds like their main purpose is to keep us "antis" from the women going in.  Heaven help us if we actually (gasp!) talk to them or even (shriek!) hand them a pamphlet!

Whatever your position on abortion is, clearly the action of blocking my recording in this instance had nothing whatsoever to do with the stated WACDTF goals - unless, of course, those goals have been revised to include the aiding and giving cover to would-be thieves and vandals.  Moreover, take a look at the second line under their (so-called) Nonviolence Policy.  The escorts are there at the invitation of the clinics!  Hmmm!  Does that mean "the clinic" - in this case, Planned Parenthood of Metropolitan DC - would assume any responsibility for any escort misbehavior?  Good question!  So would Planned Parenthood be responsible for this escort's giving cover to this vandal?  Maybe they should ponder that a bit - just a suggestion!
Posted by Restore-DC-Catholicism at 5:57 PM