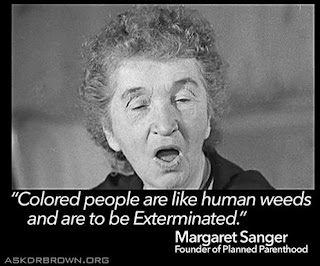 Today abcnews.com showed an interview between George Stephanopoulos and Cecile Richards, Planned Parenthood president.  They were discussing the two videos (see here and here) showing that Planned Parenthood is selling the various body parts of babies whom they murdered vis-a-vis abortion.  Throughout the interview, Richards tries to say that the two doctors' comments were taken out of context.  She conveniently fails to mention that the full, unedited encounters are available for anyone to view on the website of Center for Medical Progress, the organization that made possible the exposition of Planned Parenthood's bloody but lucrative enterprise.

We've now seen two videos.  The Center for Medical Progress indicates that even more are yet to come.  In the second video link, you can see that it starts with Richards' lame attempt at "damage control".  I post below a parody of Richard's attempt.  It is from that video that I derived inspiration for the hashtag above.  Another hashtag on Twitter is #handsupdontcrush.  There will be more to post.

Posted by Restore-DC-Catholicism at 4:29 PM