Congress To Investigate Planned Parenthood In Wake Of Video Revelations

In the wake of the video that showed Planned Parenthood to deal in body parts from the babies it murdered, the United States House of Representatives - from John Boehner on down - announced that it will be investigating Planned Parenthood.  As the video states, the trafficking in baby body parts is illegal on many fronts, let alone an exercise in pure callousness towards innocent children. 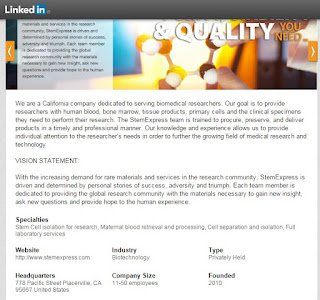 The House's actions echo those of Bobby Jindal, Rick Perry and Ted Cruz.  I think it worth mentioning that some credit goes to Christian Defense Coalition, Operation Rescue, Survivors of the Abortion Holocaust and Created Equal for bringing the matter to the steps of the Capitol.

A word about StemExpress, the "partner" that Nucatola named in the video.  To the right is a picture of their Linkedin page.  You'll notice that it cites a web page for the organization.  HOWEVER, the site is now defunct!  Like Nucatola, they are now in "damage control" mode.  Their address is still known so I'm sure subpoenas can still be served, if Congress is so inclined.

Still, much can be found by googling StemExpress.  Its CEO (at least in 2014) is one Cate Dyer.  See here and here.  As more is found, I'll post.
Posted by Restore-DC-Catholicism at 9:19 PM