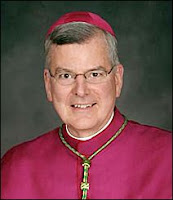 Archbishop John Nienstedt of the Archdiocese of Minneapolis is sending DVDs to the homes of area Catholics to urge support for a constitutional amendment to ban gay marriage in Minnesota.  Sane and sensible Catholics applaud the Archbishop for his defense of marriage and family.

Then there are the other types of Catholics.  A bunch of them have developed a website called "returnthedvd".  Says one such person (as quoted in the Star/Tribune), "We just disagree that this is a priority. It's really not a matter we should be about as compassionate Christians. I think we should stress inclusiveness and the poor and people in need."

Flashback to yesterday's post about the "Minions Of The Nanny State".  What was one key point?  It's that these so-called "social justice" types want to cloak their deadly dissent in a veneer of "compassion", etc.  I say their dissent is deadly because, if unchecked, it will grease the slippery slopes towards eternal damnation for those foolish enough to drink their kool-aid.

One such dissident is Lucinda Naylor, who is the former artist in residence at the Basilica of St Mary in that diocese.  We read in the Minnesota Independent that she plans to create a sculpture made of the returned dvd's - to create a message of "creativity and hope"!  Doesn't that sound so lovely?

As noted, she is the former artist in residence at the Basilica.  She has been suspended from her position as a result of her public dissidence.  Kudus for Archbishop Nienstedt.  Let us thank him for his courage as we pray for Ms Naylor and her equally misguided companions, that they may repent of their sins of public disobedience to Christ and His Teachings.
Posted by Restore-DC-Catholicism at 10:20 AM