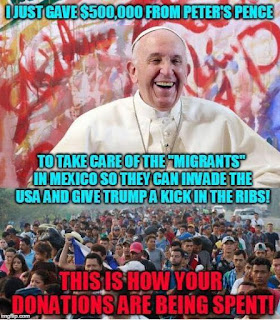 Take a good look at this meme to the left.  This deals with the news that Pope Francis donated the equivalent of $500k in US dollars, ostensibly to "immigrants" who are on the south side of the US-Mexican border.  They are indeed stalled there because President Trump will not allow them to conduct a de facto invasion of the United States.

Read about it from the Church Militant site.  You'll see that Michael Hichborn did some arithmetic and deduced that, given the estimates of 75,000 individuals south of the border, that some of money would only buy each one hamburger meal.  Hichborn hypothesized that it could simply be a publicity stunt meant to embarrass President Trump.  One can hope it's merely that.  What do I mean?

Let's turn our attention now to this report from the Rutherford Institute, regarding the trafficking of children for sexual exploitation.  Apparently it has become quite a sordid industry in some quarters.  So what does this have to do with this latest papal stunt?

No one who is half awake can escape the fact that many high-ranking prelates have raped young children.  We know that many children are being brought across the border for the sole purpose of being sold to perverts.  I would wager that many of those same pervert-customers are wearing Roman collars (or have worn them, in the case of the perps being caught).  Perhaps that $500k of papal money isn't really going towards hamburger meals and many of those 75,000 individuals may not see one iota of benefit at all, papal protestations to the contrary.  I've no doubt that part of the reason is to insult Trump; else, why publicize it?  If only we could follow that money as it ostensibly arrives in Mexico.  We might be surprised - or maybe not!

Even better than following that money would be reducing the amount of that money.  In a few weeks, the "Peters Pence" collection will occur.  Here is the calendar for the Archdiocese of Washington; I understand that many other areas will have that collection at the same time.  This is another one to boycott.  If the Vatican can buy hamburger meals or keep the flow of trafficked children coming into the US, not to mention hosting envirowhacko meetings with Jeffrey Sachs et al, they really don't deserve our hard-earned money.

Let's boycott the Peters Pence collection.  When that Sunday happens, don't just pass the basket along.  Drop in it your own envelope with a note in it that details why you won't donate to such an unworthy endeavor.  There are plenty of other decent charities that would put your donation dollars to excellent use.
Posted by Restore-DC-Catholicism at 9:08 PM 3 comments:

By And Large, We Are NOT A Serious Church

Not too long ago I came across an article on the internet that had as its theme the idea that the United States is no longer a serious nation.   The author opined that to be a key reason why we, as a nation, seem mentally unable to deal with the various societal ills that plague us: breakdown of morality, the de facto invasion of our southern border, etc.  I wish I could find it so that I could link to it but so far I have been unable to locate it.

I have thought a bit about it, particularly in terms of coming up with a root cause for this national shortcoming, and I believe that cause to be rather obvious.  We are not serious as a nation for by and large, the people of this country are not serious, but rather silly and shallow.   We see this in so many aspects of ordinary life: sloppiness in dress, the disregard and outright disdain for common manners and decorum, crude "humor" and of course, sexual immorality and increase of violence.

Last week Cardinal "Nighty-night" Tobin gave an interview, during which he misrepresented Catholic teaching on homosexuality, perhaps in an attempt to demonize the Church and to gin up sympathy for sodomites. When asked by a reporter if the Church calls homosexuals "intrinsically disordered", Tobin replied in the affirmative.  He opined that the language was "hurtful" and expressed desire that the language would "become a little less hurtful".

But that's not what the Church teaches.  She never teaches that people are disordered, but rather their sinful inclinations are.  Yes, the inclination to homosexuality is intrinsically disordered, since sexuality is ordered to procreation.  The inclination is itself not sinful.  However, if a person so afflicted acts on that disordered inclination, then he or she does commit sin.

There are two likely reasons for Tobin's gaffe.  Either he is abysmally ignorant of Church teaching on this topic, OR, he is deliberately lying regarding the Church's teachings in order to make the Church appear as an ogre bent on oppressing sodomites.  I strongly suspect it's the latter.

Msgr Charles Pope, in an article in the National Catholic Register, clearly laid out Christ's teachings on homosexual conduct, as they have been recognized for centuries.  He also warned errant clergy of their culpability, should they dare encourage this mortal sin or contradict Our Lord Himself.  Cardinal Sarah likewise laid out a dire warning to his fellow prelates.  Cardinal "Nighty-Night" is a Prince of the Church.  As such, he will have much for which to answer if he doesn't repent of his fomenting of dissent that has no doubt led many souls straying into hell.

No doubt the world has heard by now that Notre Dame Cathedral in Paris was severely damaged by a fire today.  The fire destroyed most of the roof and a spire.  Firefighters managed to save a relic of Jesus' Crown of Thorns and a tunic used by King St Louis IX, along with the Blessed Sacrament.

The Cathedral dates back many centuries.  It is both a religious and cultural landmark not only of France and Western civilization, but that of the Roman Catholic Church as well.  However, I join many others in believing that this disaster is a harbinger of God's judgments that are yet to come.  We may well bewail the fate of the Cathedral,  But how many of us in Maryland are just as disturbed that Mark Shriver, a dissident Catholic, will befoul another institution names after Our Lady next month?  I've already written about that.  The question is, what are faithful Catholics doing about that??

We have a pope who scrapes and bows before pagan world leaders, but won't genuflect before Our Lord during Mass.  We stand by while he spews forth verbose documents that only serve to obfuscate God's timeless truths.  We have prelates who cover for each other as they rape young boys and men.  These same prelates wink at priests who lead their parishes in "pride parades" while punishing faithful priests for preaching true Catholic doctrine that some sin-blinded people find too convicting.
Posted by Restore-DC-Catholicism at 10:18 PM 3 comments:

As stated last Sunday, Mark Shriver is a high-ranking official with the Save The Children Foundation.  It is ostensibly for that reason that Mount St Mary's asked him to do the 2019 commencement address.  It turns out that while his pro-abortion record alone should have disqualified him from this engagement, this Save The Children Foundation is problematic by itself. 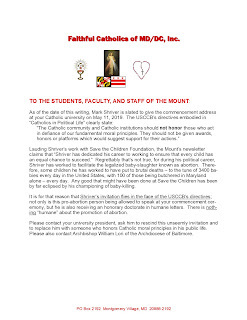 Michael Hichborn of Lepanto Institute did some research into this foundation and discovered its advocacy of contraception and sterilization.  Hichborn ended his piece by stating that no faithful Catholic can provide funds or praise for an organization that promotes contraception under the guise of "helping children".  That would apply to the Mount as well.

A petition is being circulated to ask Dr. Trainor to rescind this invitation to Shriver and to get another who honors Catholic moral teachings.  I urge you to sign it and circulate it.  However, let me be clear - this petition by itself will not suffice to discharge our duties to stop this Shriver outrage.  Your phone calls and emails to both Dr. Trainor and Archbishop Lori are needed as well.

Some students and staff may recognize this flyer, as it was distributed on campus today.  If not, here it is.  Please feel free to reproduce it and to pass it around.  Please also call Dr Trainor and Archbishop Lori now.  Pray too that decency and common sense prevail.  If not, a picket may have to occur.  Thanks.
Posted by Restore-DC-Catholicism at 10:04 PM 5 comments:

On April 4, the Papal Posse touched upon a number of topics, including Christus Vivit.  Enjoy.

Posted by Restore-DC-Catholicism at 11:25 PM 3 comments:

From The Et Tu Brute Department: Mark Shriver To Give Commencement Address At Mount St Mary's - Act Now To Stop This

In his book, Goodbye Good Men, Michael Rose extolled the seminary at the Mount as being one of the few decent ones that weren't overrun by gay pervert infestation.  Of course he wasn't speaking about the Mount at large, so maybe the seminary has been spared from participating in the immorality that must have underpinned this regrettable invitation.  Shriver will speak Saturday May 11 and receive an honorary doctorate of humane letters.  The abortion he advocates is anything but "humane".

As I look at the Board of Trustees, I see that Msgr John Enzler, of Catholic Charities notoriety, is on the board.  I perceive his paw-prints all over this invitation.

The Cardinal Newman Society has more information.  I've also posted on Shriver and the ridiculous pandering he's received from Churches and other Catholic organizations.  You'll also see in that anthology that faithful Catholics (including Yours Truly) have picketed him during some of those occasions.

Timothy Trainor, president of the university, can be contacted here.  Again, looking at the Board of Trustees, we see the name of Archbishop Lori on there.  Of course he'd be there, since the Mount is located within the Archdiocese of Baltimore.  It is worth noting that he attended seminary at the Mount.  He should also be contacted here.

We must ask them to withdraw the invitation to this pro-abortion person.  Else, they are flagrantly violating the directives set for in the USCCB's "Catholics In Political Life".  Will we picket this commencement?  The answer to that question is very much up to the Mount.

Also, please lodge your protests on the Mount's social media sites: Facebook and Twitter.
Posted by Restore-DC-Catholicism at 11:58 PM 18 comments:

ADW Catholics, Are You Ready To Take Action?

Posted by Restore-DC-Catholicism at 9:00 PM 4 comments:

The long-dreaded announcement came this morning.  Sodomite-enabling Archbishop Wilton Gregory will leave the Archdiocese of Atlanta and will replace Cardinal Wuerl.  Several things are accomplished by this move:

For now, I direct you to a petition started by LifeSiteNews and ask you to sign it and to tell your friends about it.  By the way - as I read the list of travesties committed by Gregory, I must admit that he has nothing on Wuerl or McCarrick.  However, his appointment is an unmistakable indication that the pope approves of these insults to the Faith.

Stay in touch with both this blog and the website of Catholic Laity for Orthodox Bishops and Reform.  Therein you will find news of activities in which we must participate.  For now, please act on that petition and be praying your Rosaries.
Posted by Restore-DC-Catholicism at 8:50 PM 1 comment:

RICO Investigations - Bring Them On

Posted by Restore-DC-Catholicism at 11:45 PM 2 comments: