Three Insults To The Faith in One Week

This past Monday, Joe Biden, Vice President of the United States and dissident Catholic, "officiated" at the #mowwidge of two White House staff members, both of them males.  I hesitate to call them "men" for real men understand and obey the laws of nature and nature's God.  Canon lawyer Ed Peters has some reflections as to whether or not he incurred excommunication by making a mockery of true marriage.  One key point that he makes is that if the Pope or Cardinal Wuerl were to issue canonical legislation making what Biden did a canonical crime, then yes Biden could be excommunicated.

Earlier, at the DNC convention, the president of NARAL gave an account of her own abortion in order to gin up support for more baby murder.  Sister Simone Campbell, a "nuns on the bus" leader, applauded this talk.  Campbell has made no secret of her support of abortion.

Then we have some outright heresy from Father James Martin, S.J.  Currently he is editor-at-large for America magazine, the dissident rag published by the Jesuits.  During the past few days, Martin let loose with these tweets. 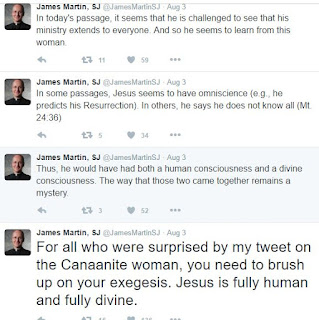 For him to state that Jesus could be "challenged" by the Canaanite woman is to allege that Jesus had intellectual and moral imperfections.  That is a pure slap in the face to the Divine Personhood of Jesus.  Yes, He has two natures but as a Person He is Divine, with all that it entails.  However, while Martin undoubtedly pronounced heresy, he's not the first Jesuit of recent memory to do so.  Last December, the pope opined that Jesus probably had to beg forgiveness from His parents.  Again, to ascribe sinfulness to God Himself is heresy and probably blasphemous as well.

So I've now pointed out three insults to the Faith, all occurring in a week.  The timing isn't all that these three incidents have in common.  Here's another thing that I think they'll have in common.  Those responsible for these heresies will most likely suffer no consequences for their misbehaviors.  Their superiors will look the other way and pretend that these didn't occur.

Posted by Restore-DC-Catholicism at 11:37 PM