James Alex Fields May Not Be Guilty Of Intentional Homicide

Hitherto many people (myself included) believed James Alex Fields to be guilty of murder in the death of Heather Heyer.  Certainly the progressives are milking that tragedy for all they can.  Videos and pictures have surfaced that indicate that Fields may have been acting in panic, even fear for his life when he accelerated into the crowd.  The video is below:

Now here is a "still" of the instant when Fields' car was hit - note the plates, it is his car. 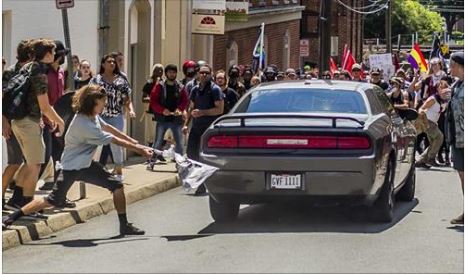 Are they the same scene?  Between the video and the picture, compare the stances of the striker, the knee-length pants, shoes and socks, baggy shirt, flagpole, the man standing on the other side of the road.  They are the same scene.

This post, because it is a long one, will continue after the jump break, so..

Whoever that person is who hit Fields' car behaved in a manner that has been typified by antifa and others who make it a practice to block and/or attack cars.  Let's take a look at some of the background of antifa, shall we?

The next post is that from another who was in attendance (pardon the language).  He shows the police in riot gear and shows the police ushering the alt-right into the midst of the leftwing contingent.  Right there was a recipe for disaster, and disaster most assuredly occurred.

I'm going to post a number of links to various accounts of what happened last weekend.  For the record, I don't necessarily subscribe to all their commentaries, but think that the evidence they present (much of it visual) is enough to demonstrate that leftists were definitely manipulating the situation in Charlottesville in an attempt to besmirch conservatives and those who want to remain faithful to our nation's history.  They wanted the violence.  Did they intend the murder?  They certainly knew there would be personal injuries; in fact the leftists inflicted much of them.  The responsibility for the death this weekend can be laid at their feet, and that includes the mayor of Charlottesville and the governor of Virginia. These details need to be noised abroad, before Jason Alex Fields becomes their designated scapgoat.   Here are the links and they will conclude this post.

Posted by Restore-DC-Catholicism at 9:35 PM