Yesterday good citizens of the state of Michigan descended upon Detroit to make clear to Governor Whitmer that her draconian constrictions upon them will no longer be tolerated.  They called their protest "operation gridlock".  I for one was delighted to see that and pray that we may all emulate their example if our local tyrants don't wake up and smell the coffee.  Many of these same citizens are now taking her to court and I hope they prevail.  If they do, a precedent will be set that we will use.

Frankly, though, I'm not sure what troubles me more: the power-hungry grabs of the governors, OR, the gutless and passive acceptance of these dictates by so many Americans and even Catholics.  I have had numerous discussions both in person and online with faithful Catholics who have regrettably swallowed the "safety-first" koolaid.  When I mention that the founding fathers who wrote the US Constitution wisely allowed for no exceptions to the First Amendment, they poo-poo it. Their excuses:

They acknowledge the status of the First Amendment as a guiding principle, to their credit.  They then claim that sometimes that principle needs to take a lesser place for "safety".  Well, here's a problem.  When we break principles to satisfy some real or perceived need, one cannot invoke that same principle when some other threat emerges, one that might have been prevented had the principle remained intact.  Why cannot we not invoke that principle?  Because we have already allowed for the breaking of the principle for safety, so why cannot someone break it for another reason?

In light of that, consider the "Spanish flu" excuse.  It's quite likely that the US government, in 1918, did play fast and loose with the First Amendment.  They violated it.  In using that sad episode to justify the abrogation of our First Amendment rights today, very imprudent people are actually demonstrating the harm done by that violation of the First Amendment 100 years ago.

Truth be told, though, I think many Americans don't understand their own history.  When I've mentioned "First Amendment", some of them scoffed and asked how my freedom of speech was being abridged.  They didn't know that freedom of speech is not the only civil right addressed in the First Amendment.  Under attack now are two other First Amendment rights: freedom of religioin and freedom of assembly.  If they went to public school, their study of American history was devoid of any study of the founding documents and why they were written.  It is up to us to fill in the gaps of knowledge ourselves.

Similar deficiencies exist in the formation of Catholics, and the events of the last few weeks have made that quite clear.  In one facebook discussion, one misguided individual stated that Jesus was just as concerned for the body as He was for the soul.  Well, not quite.  While caring for the the whole man, Jesus clearly placed greater priority on matters of eternal salvation than He did on temporal affairs.  Many though, especially those in the Church hierarchy, have no supernatural faith and truly don't believe in the afterlife.  Therefore it really is no wonder that their sole focus is on maintaining physical safety, or at least an illusion of it.  They don't value the efficacy of Holy Mass or the other Sacraments, so they see it as no tragedy to restrict our access to God's graces.

Then there exists the fairytale about "virtual Masses".  First, a clarifying note.  The parish priests who are producing these virtual Masses are by far simply doing the best they can under the constraints under which they must operate.  I've no doubt that they are hurting that they cannot make the sacraments more available to their parishioners.  However, they are vowed to obey their bishops, and it is the bishops who are the source of these draconian and I daresay sinful restrictions.  In Maryland, Hogan never completely forbade religious services.  It is possible to hold Mass, albeit in much more constricted manners.  Therefore no excuse existed to completely shut the Churches.  And why did Lori stop all confessions, while confessions continue in the south part of MD that is in the DC diocese?

But let's get back to the general populace.  Since when did US citizens become a nation of pantywaists?  Government officials, flouting the constitution, order citizens to abandon their rights and their lives out of craven fear of some virus.  Instead of standing up to these thugs like men, too many cower before them and meekly go along with the tyranny.  Besides ignorance of both our Faith and US history, are there other root causes to the timidity of so many?  Perhaps. 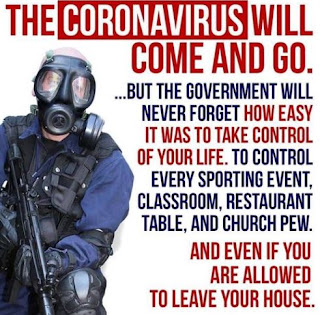 Many of us have been spoiled by living off the fruits of the struggles of our forefathers.  We have become used to lives of relative ease and comfort.  We never had to face dire situations that forced us to develop spiritual fortitude and moral courage.  Therefore, when faced with evil, we fold like a deck of cards, roll over and play dead.  For the past few decades I have seen this play out as I have pleaded with fellow Catholics to join us in front of abortuaries.  They refuse to step out of their comfort zones, believing that they aren't obliged to take any moral stand that might cost them something.  Now faced with corona tyrants who promise them that all will be normal in a few weeks (and now the deadlines are ever-moving), they choose to blind themselves and hunker down for what they think will be temporary degradation - as long as they don't have to display courage and stand up to evil.

But now lives are being ruined as good people are watching their livlihoods needlessly wither away.  How much longer are the willfully blind sheeple going to stand with eyes shut and ears plugged?  We had better snap out of our torpitude before it's too late.  People in Michigan have started to act.  Tomorrow in Maryland there will be a similar protest in Annapolis and I will be there along with (hopefully) thousands others.  People in PA and other places plan protests within the next week or two.

Of course we as Catholics must be in prayer for our nation.  We certainly pray for those who are suffering from covid-19.  But make no mistake - this corona thing is a mere pretext for the undermining of the United States Constitution and of Trump's presidency.  It is time to wake up and to get off our duffs and act.
Posted by Restore-DC-Catholicism at 9:36 PM