I refer to the excuse for a crozier that the pope is carrying in this picture. 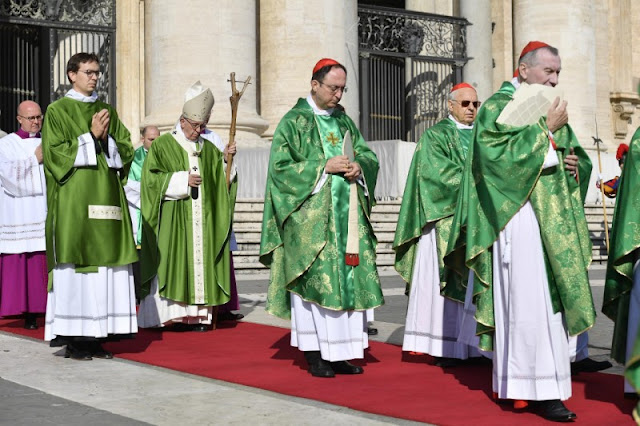 And no, it is not photoshopped; it comes straight from the Vatican's site.  In the "photo" section, it's in the second row, third column.  Moreover, the video shows him plainly carrying it.  By the way, the video is one of the pope saying Mass before the 15th Ordinary General Assembly of the Synod of Bishops.  At around the 49:30 mark is the consecration.  Again we don't see the pope kneeling in adoration as instructed in the rubrics.  The cameramen are careful to pan out during those moments, but they cannot disguise things.  Because the pope has knelt while protestants "prayed over" him, we know it's not a question of handicap.

Edit: Thank you, Rorate Caeli.  This is the "youth synod", you know, the one whose "working document" will dignify the acronym "LGBT".  This is courtesy of Book-thief Baldi.

Between the refusal to kneel and the crozier that looks like a broken farming tool, we have to wonder about the level of reverence shown for Our Lord - if that reverence exists at all.  Is this a harbinger of the output that we should expect from this synod?

Will this "youth synod" feed into the World Youth Day for 2019?  Remember what that logo is?  Why am I beginning to smell a sinister rat?
Posted by Restore-DC-Catholicism at 10:06 PM