Maryland NARAL Rebuked At 2012 Gala By Our Picket

On Friday we announced two events for pro-life prayer and activism.  The first event, NARAL's "Evening of Chocolate" fundraising blood-feast, occurred yesterday.  At least fourteen pro-lifers were there to greet them at the entrance to Sandy Spring Volunteer Firehouse, where NARAL had rented out the Oak Room for their fundraising orgy.  Our picket line actually stretched down from that driveway to the Brooke Road / Route 108 intersection.  There is a stoplight at that fairly well-traveled intersection so all those passing by got an education as to what was occurring at that time in their neighborhood.  Quite a few of those driving by gave us "thumbs-up".  Some of those going into the blood-feast raised other fingers at us - what can be expected of those minds and sensibilities dulled by the support of baby-murder?

Below the jump-break I'll give more detail, with photos and a video, so...


Since NARAL had scheduled their debacle to begin at 8pm, we arrived at 7pm to greet and educate/rebuke the attendees as they arrived.  We realized that most folks would be coming by way of Route 108 so we had the picket stretch from 108 to the driveway (a very short distance).  As they approached the intersection, here's what they would have seen: 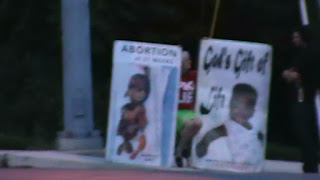 This is on the south side of the intersection.  Here the pro-life person is discussing the matter with a passer-by. 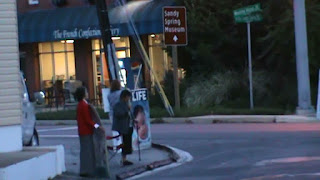 This is on the north side of the intersection.  The lady in red is standing at the mouth of Brooke Road. 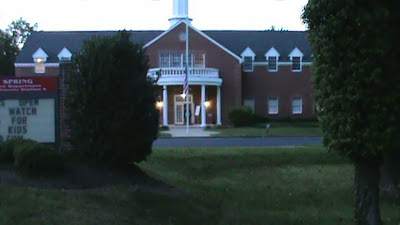 Above is Sandy Spring Volunteer Firehouse.  I believe the Oak Room is on the right (as we look at this) on the first level.  Please take note of the sign on the extreme left.  It says "Watch for kids".  It is ironic that they post this sign while hosting an organization that makes money off the murders of millions of tiny kids.

As they turned into the first driveway, they would have received some more education, as well as prayer. 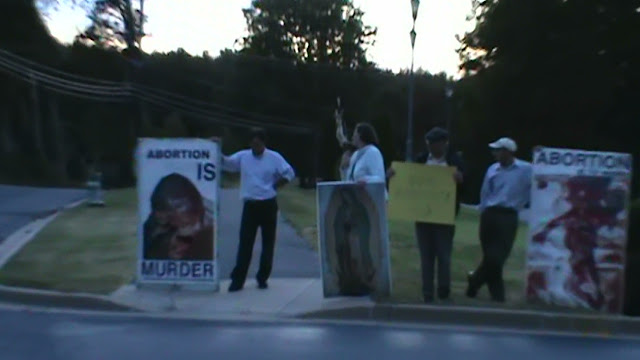 Time and time again we saw attendees hesitate at this driveway.  It seemed that they weren't certain they arrived at the proper place.  After all, they were expecting to have good ole time celebrating abortion, and here they were, being confronted with all those horrible pictures to poop their party!   Actually, we did do our best to assure the poor deluded dears that they had indeed arrived to their celebration of mortal sin.  Here is the enlarged picture of the yellow sign that you see above. 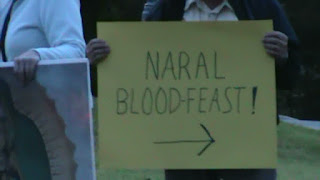 See how helpful we were??

The next pictures will be rather dark.  It took the NARAL folks a while to figure out how to turn the outside lights on, but the pictures are clear enough.

It was quite evident that these pro-aborts simply rejected the truth of what they were doing.  We received quite a few "large fingers" and profanities.  We even saw some "road-rage".  One of the attendees was so upset that he zoomed at break-neck speed into the parking lot, nearly ramming another pro-abort's vehicle in the parking lot (several times) during his rampage.

Apparently the NARAL staff heard enough whining and sniveling from their guests that they had to "come to the rescue".  First they told us that we were on "private property".  One of our number then pointed out to her the surveyor's line in the driveway that clearly delineated that we were indeed on public right-of-way.  Well, with Plan A shot down the crapper, she had to come up with Plan B.  Below is a picture of her with her "Plan B".  I apologize for the darkness, but you will see the point of what I'm saying. 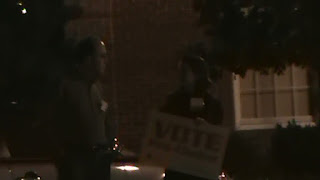 This is the young gal.  She came out with this sign and tried to block the signs of the group standing at the driveway.  As you look at it, you can barely make out the word "Vote".  You really have to strain to see the words "pro-choice" beneath it.  It could not be read from a car.  Anyway, with her sign indistinguishable from the rest of our signs, it might have appeared that she was one of us.  I briefly debated with myself as to whether or not I should inform her of this possibility, but decided to let her figure it out for herself.  I don't know if she ever did.  Eventually she moved back towards the building with her companion and contented herself with directing incoming traffic.  A few of them came out and snapped some pictures of us.  I specifically requested that they include the text of our signs in their pictures to help educate them.  I suppose they photographed us because we were the most interesting part to an otherwise drab and dreary evening.

And the traffic came; much of it was rather late.  They were "fashionably late" as one of us stated.  We thought we'd be gone by 8:15, but we stayed until the last orgy-attendee arrived at 8:45.  Knowing the state of Maryland politics, we knew we'd be seeing some of these: 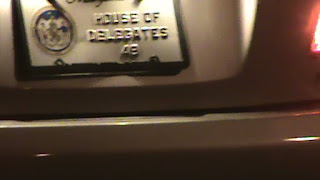 This Toyota is owned by one of District 45's three representatives.  So who could it be?  Well Talmadge Branch has a 100% rating by Planned Parenthood.  Cheryl Glenn's 100% pro-abort rating comes from NARAL itself.  But so does Hattie Harrison (by the way - scroll down that page and see that she has a 63% rating from the Maryland Catholic Conference.  See why the MCC voting guides are an abysmal travesty?  But I digress)  So it could be any one of the three.

By the way - District 45 is in Baltimore City.  We realized that NARAL moved the venue of these fundraisers north of central Montgomery County to attract pro-aborts from other parts of the state.  They were successful with at least this one delegate.  At the other entrance another delegate's car was seen, but we didn't see from where he/she originated.   Speaking of the other entrance, we didn't leave that one entirely neglected. 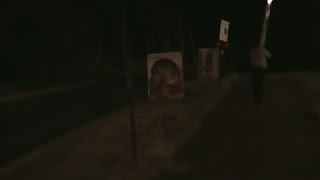 Only a small number went in that driveway.  Here's a very brief video that gives a panoramic view of the picket line, starting from the north and swinging to the south part (Brooke/108 intersection).  Click here if you can't see embedded video.


Two of the Spiritual Works of Mercy are "rebuke the sinner" and "instruct the ignorant".  We accomplished that, whether or not the attendees appreciated it.  I trust we caused them sufficient discomfort; no one should ever be comfortable in the celebration of sin - particularly in the murder of innocent babies.  We will do our best to provide them with more Works of Mercy.

Posted by Restore-DC-Catholicism at 6:12 PM