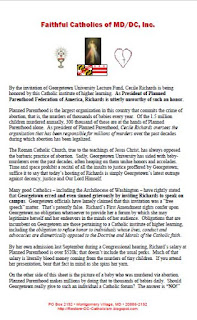 Georgetown University went ahead with their honoring of Cecile Richards, President of Planned Parenthood - the nation's chief organization for the murder of babies.  Sadly we're not surprised but still it is just one more insult to Catholic education in this country.  As announced two days ago, there were several protest locations at Georgetown.  Today I was at two of them.

The first one was outside Lohrfink Auditorium itself.  Because I had to spend some time to find a parking place, I arrived there about 12:40 pm.  I could see that the Students for Life contingent was penned in an area where they could be seen from the attendees at a distance but there was no chance for interaction between those going into the talk and the pro-life activists.  I stood at the bottom of the steps and distributed my flyer (see right) - for as long as I was permitted.  After about 30 minutes a woman who identified herself to me as "Dean of Student Affairs" marched herself downstairs and ushered me to the "protest pen" (for lack of a better word).  Frankly I suspect the cause of this move is because my flyer did directly rebuke Georgetown for bringing Richards to campus.  I was able to distribute about 25 of them before I was effectively stifled.  I decided not to protest the move since I do respect the fact that Georgetown is private property.  Still, I find it fascinating that a woman who makes her living, at least in part, from the murders of babies is allowed to speak on campus but pro-life activists are penned off as though they pose dire threats to the students. 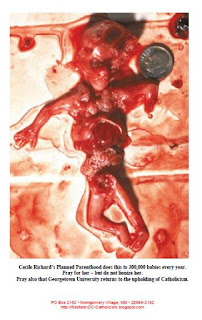 Just now, out of curiosity, I went to the web page of this "Student Affairs" office and got a clue as to the icy treatment that I received.  Not surprisingly, the page reeks of dissidence against Church teaching, to the point of possibly directing students - LGBTQ students, that is - to hell.   They have a whole "resource center" dedicated to them - something that I don't see for ethnic minorities, by the way.  This resource center boasts of being "the first such center of its kind at a Catholic/Jesuit institution in the country".  Well, whoopdie-doo!  If that's what Georgetown calls "brag material", no wonder their moral credibility is swirling down the crapper!  Ever hear of a "lavender graduation"?  Well look no further!  Georgetown is having one (next week, apparently).  The whole page is designed to make it easy for these poor deluded students to confirm their own damnation.  I seem to remember Our Lord talking about those who scandalize "little ones", saying it would be better for them had millstones been tied to them as they were tossed into water.  This reeks of satanic evil, but I digress.

After about 20 minutes or so in "the pen", I left there and headed east through the campus to where I was parked.  As I walked east, I continued to distribute flyers to students passing by me.  I then reached the eastern part of campus when I heard bagpipes.  I knew then that the American Society for Tradition, Family and Property was at the O Street entrance - where they were when we protested the appearance of Kathleen Sebelius four years ago.  Today the American TFP roundly rebuked Georgetown.  You'll hear it in the video below.

I know that Defend Life staged a protest along M Street; about 15 people held a "life chain" with signs to explain why Richard's appearance was such an atrocity.  I was unable to get down there but I await a report as to how that went.  Now here's the video of American TFP.

Posted by Restore-DC-Catholicism at 9:43 PM