The Lunatics Start Wrecking The Asylum

Now that Pelosi and company have once again utterly failed in their mockery of an impeachment, they can once again give the business to, uh, I mean, do the business of the nation.  Ahem! 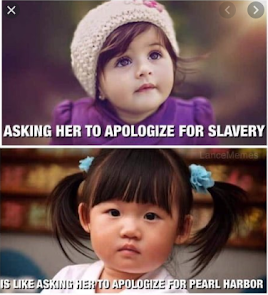 Important aside.  I mentioned "mockery of an impeachment", not actual impeachment.  Impeachment, by constitutional definition (article 2, section 4), is removal from office.  But Trump was already removed from office by the rather questionable election.  There is no constitutional provision for impeachment of a private citizen.  They failed - again - to get the 2/3 of the Senate to vote him guilty.

So what pressing issues now occupy the insipid intrepid leadership of Congress?  Well, we have the "No Glory for Hate Act" put forth by Linda Sanchez D-CA.  Claiming erroneously and disingenuously that Trump was impeached twice (again, that second side-show was NOT an impeachment and he was acquitted both times), she crafted this poop to state that it is forbidden that statues, monuments, etc be created in Trump's honor using federal funds.

Hmm..  I wonder how some of these funds would now be used?  Why, Sheila Jackson Lee is putting through a reparations bill to provide "appropriate remedies" to slavery and discrimination dating back hundreds of years.  So who will pay all that?  We the taxpayers will!  I'd be willing to bet that in that regard, there will be no bias whatsoever; we'll all pay, regardless of race and/or ethnicity.

By the way - have you noticed that gas prices are rising, now that the pipeline is shut down and we're saddled with the Paris Climate hoax once again?  Just think!  This is only the first month of the Biden/Harris Debacle!  We've got four more years of this, two if we're lucky and can get Congress back in 2022.

Posted by Restore-DC-Catholicism at 4:42 PM