As Biden Plows Ahead With Pro-Abortion Orders, The Church Hierarchy Runs Interference For Him

President Plugs has been a busy little bee, signing the "executive orders" that his handlers have been placing before him.  Here is a list of them as of February 2; no doubt the list will be increasing as the days go by.  He also reversed the Mexico City Policy and restored funding to Planned Parenthood, meaning that our tax dollars will again go towards the slaughter of babies. 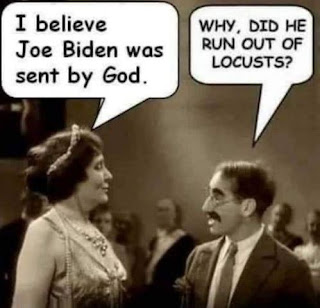 The progressives in Catholic circles aren't all that concerned about baby-slaughter, it would seem.  Indeed, there appears to be a "circling of the wagons" as it were, around Biden.  Bishop McElroy of San Diego decries "some bishops" making a "litmus test" out of abortion.  He criticizes them for making abortion the top priority in their evaluation of Biden.  He said, "if adopted, such a position will reduce the common good to a single issue".  McElroy refuses to consider that for 3500 babies every day, that single issue is all there is; no "common good" for them!  Of course, what they consider "common good" is itself debatable, but that's another post.  As you can imagine, McElroy has been mentioned several times on this blog.  Let's not forget also the fit that Cardinal Cupich pitched when the USCCB pointed out Biden's disregard of basic morality.  Not to be outdone, the nut nun on the buss Sister Simone Campbell praised Biden for having "a very developed approach" to abortion.  Very developed!  I wonder if she thinks Adolf Hitler had a "very developed approach" to relationships with Jews?
Now the Vatican itself is applauding Biden's actions on abortion.  We can only presume that it does so with the approval, if not the initiative, of Pope Francis.  This is being done by the misnamed John Paul II Pontifical Theological Institute for Marriage and Family Sciences.   After waxing lyrical about Biden's "social gospel" championing, they let loose with this whopper: "Defending the right to abortion does not mean defending abortion".
Alrighty then!  Let's explore that line of thinking by some word substitution.  How about substituting "child rape" for "abortion" in that last quote?  Or maybe slavery?  At the very least, it seems that this "theological institute" itself may be defending the right to abortion.  But not abortion itself!  Got that?
Now we know who is running interference for Plugs - or attempting at least to do so.
Posted by Restore-DC-Catholicism at 9:37 PM