The United States Conference of Catholic Bishops today issued a statement (of sorts) on the Sandy Hook shootings and what they think are the answers.  Well, I don't know if the bishops themselves penned it (although they affixed their names to it) because it has the smell of progressive agendas all over it. 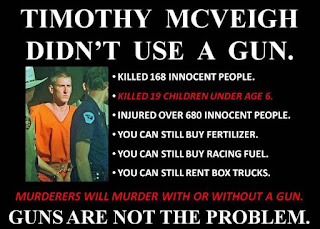 A number of sensible articles have been written about the Second Amendment.  I would suggest that the USCCB puppet masters read them, but I suspect they full well know the truth and are doing their utmost to keep the truth from the Catholic in the pews.  Here's one on the gun-control culture.  Here's another that addresses the real fundamental cause of violence (and not just violence involving guns): America's Problem Is a Contempt for Life.

The USCCB piece ends with 5 suggestions that they claim will address violence.  Notice that 4 out of 5 have to do with gun control - that is, confiscation of guns from everybody including the law-abiding.  I've no doubt that the USCCB puppet-masters have been given their talking points from the Democrat money-bags and are obediently doing their bidding, couching their progressivism in a faux-katholyc veneer.

Most telling, of course, is the lack of mention of the complete disrespect of life and morality as discussed by Mr. Bannister's article.  Yes the USCCB made some perfunctory remarks about violence in entertainment, but that's it.  There was no reference to Mother Teresa's wise words linking abortion and general societal violence.  For that matter, there was no mention at all of the most brutal murders of 3000 tiny babies every day.  Those murders, of course, bring in buckets of money to Democrat coffers and they're accomplished with surgical weapons that cannot be utilized against any tyrannical thug that may crash down your door.

Yet another reason why I pray that the Vatican abolishes the USCCB.
Posted by Restore-DC-Catholicism at 11:05 PM