Some Pro-Life Organizations Are Jumping The Rails Regarding Maddi Runkles

I was hoping that some common sense had again taken root among some pro-life folks with regard to the situation at Heritage Academy and the animosity being ginned up against it by Students For Life.  I have two posts on it already (here and here).  While I'm seeing most of the flap in Facebook, I do see other articles being published outside; the New York Times article was already mentioned and I'll return to that one soon.

Students For Life is quite pleased with the online and network interviews that have drawn attention to this matter - and to them too.  Of course the school administration, themselves Christian, are being portrayed as "Simon Legree" hypocrites: that is to say, they are being slandered.  I just saw that Father Pavone of Priests for Life has unfortunately wafted from the kool-aid dispenser so now I'm going to attempt to bring some balance to the picture.  While there are plenty of common-sense comments on the various Facebook posts, I don't see other blogs taking issue with Runkles and SFL save for this one and the Remnant.  If I've missed any, please advise.

The SFL-led cabal seems to have two main objections:

Let's address these, dealing with the shame.  As mentioned before, Runkles and SFL have granted interviews with Fox News, New York Times, heaven knows who else.  Who, beset with shame, deliberately makes their plight a national gazing stock?

Speaking of shame, take a look at Runkles' picture in the NYT article.  What do you make of that facial expression, with hands on hips?  It certainly isn't that of shame.  In fact, a reasonable person might call that arrogant.  Now scroll to the very bottom of the article, for a quote from her that will, at the very least, have you scratching your head: "Some pro-life people are against the killing of unborn babies, but they won’t speak out in support of the girl who chooses to keep her baby.  Honestly, that makes me feel like maybe the abortion would have been better. Then they would have just forgiven me, rather than deal with this visible consequence."  I truly hope, for her own sake, that this is just a NYT misquote.  Else, I might have to conclude that this is a cheap attempt to instill guilt trips on those of us who don't fall lock-step in with her badgering of her school.  The fact that she speaks in the present tense of preferring abortion is really quite reprehensible - assuming that is an accurate rendition of something she said.

As for the second objection, whether or not others committed fornication is conjecture.  It may well be very reasonable conjecture, but it's conjecture nonetheless.  My blogging colleague, Steve Skojec who runs the blog One Peter Five, has some very good points about the added element of scandal that would be presented, had Runkles been allowed to walk.  We have to understand "scandal" to mean the enticement of others to sin by example.  I thought of paraphrasing Steve's facebook comments but I think instead that I'll just post the screen shots.  I did get Steve's permission to quote him, but not that of the other people, so I'll redact their names.  I'll also post these after the jump break since this will be a long post.
I'll post them one below the other.  You'll notice Skojec makes some very important distinctions between public and private sins, and how the element of scandal differs between them.  I'll also post a video released today by Remnant TV as Michael Matt touches upon similar considerations.  Both support David Hobbs, the principal of Heritage Academy.  They realize that Hobbs has to consider the impact of his decisions not just upon Maddi Runkles, but upon his entire student body - many of whom are young children.  Please read below the comments and video for there is a bit more discussion. 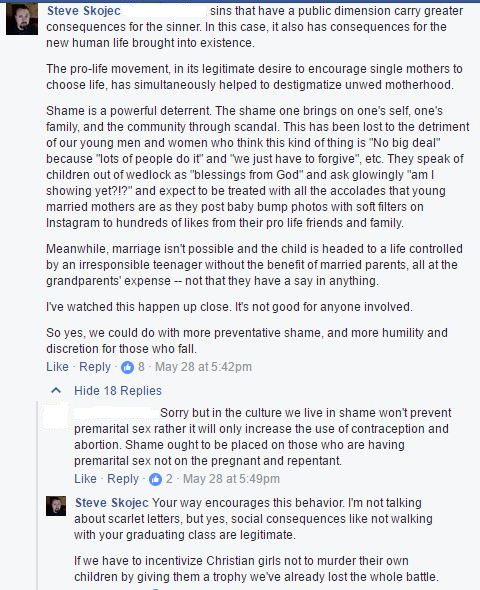 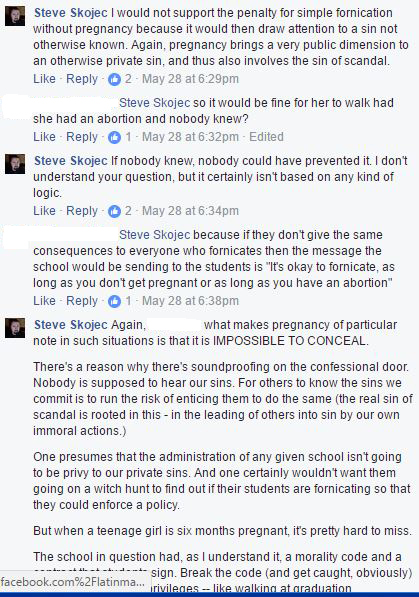 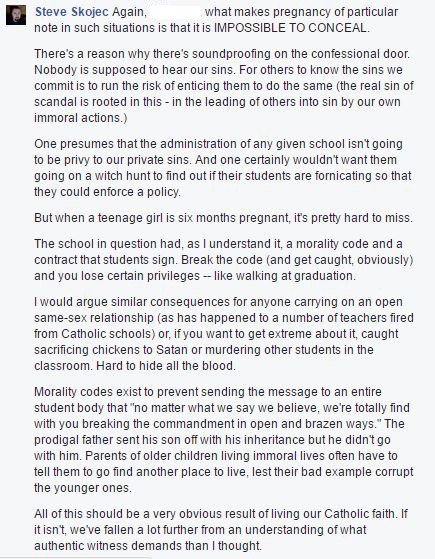 
Students for Life is the main pro-life group that has partnered with Runkles in an attempt to badger Heritage Academy into doing their bidding. While many are falling lock-step behind them, not everyone is.  Even on the SFL site there have been plenty of comments that bring balance and sanity to the discussion. I frankly suspect this opposition too them by surprise.  On their site, SFL attempts to deflect some of the well-earned criticism.  On that page, they do attempt to maintain some proper courtesy and decorum.  However, in private, the courtesy is quite lacking.  Such was my experience when I posted to a page a link to one of my earlier posts.  See for yourselves. 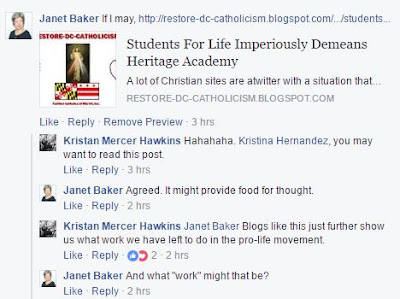 I called Heritage Academy today to express my support and to urge them to stand strong against the barrage of meddling nonsense that they are receiving.  They would appreciate hearing from you as well.

Posted by Restore-DC-Catholicism at 9:04 PM