Attention Gloria Purvis Et Al - What Do You Have To Say NOW???

When the whole George Floyd situation happened, I looked askance upon the knee-jerk reaction of so many who claimed that racism was a motivation behind the officers' actions against Floyd.  I've no doubt that their actions contributed significantly towards his death and that criminal actions should be pursued against them. However, even if it is deemed to be murder, we all know that murder can be motivated by many things other than racism.

But no, too many had to jump on the politically correct bandwagon as the Pied Pipers known as Black Lives Matter piped their tunes, leading the sheeple to follow blindly like the Piper's rats, as they rioted in the streets, committing murder and mayhem.  One wag on Facebook quipped that "BLM" stands for "Burn, Loot, Murder".  That might as well be the case.

Last month a panel discussion was held, called "Racism Is A Life Issue".  I think I did a reasonably good job at debunking some of the manure that oozed forth from that gabfest.   Since then, two events have happened that further illustrate the utter brainlessness of the politically correct "chicken littles" that are either mindlessly - or perhaps deliberately - stoking the riots and unrest.

I don't know why this took so long, but bodycam footage from one of the officers was released that shows the entire encounter with Floyd.  Floyd's behavior was consistent with the reports that he had high levels of drugs in his system at the time.  He was resisting arrest all the way, despite attempts by the officers to accomodate his alleged "claustrophobia" by opening the cruiser windows.  While the officers are by no means completely exonorated, I believe the video shows the racism canard to be an utter fabrication.  I will post the video later.

Now onto the second event.  Last Sunday in North Carolina, five-year-old Cannon Hinnant was playing in his family's front yard when 25-year-old Darius Sessoms walked up to him and shot him in the head execution-style.  There had been no previous interaction, the shooting was entirely unprovoked.  The little boy died.  He was white and his murderer is black. 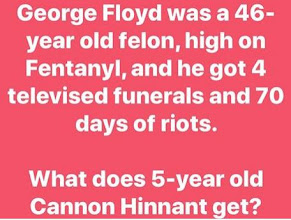 We don't hear a peep among what is laughingly called the mainstream media about this senseless murder.  Let's be honest.  Had their races been reversed, we would be hearing nonstop about this and more riots would be tearing through the country.  And of course, the USCCB and their allies would be issuing statements right and left.  So far they've said nothing.

Floyd had several televised funerals (with no "social distancing", mind you) and protest marches, with riotings, etc.  Ms. Purvis, you even joined a panel discussion that (let's be honest!) was occasioned by Floyd's death.  Will there be another for Cannon?  After all, his life mattered too - right?

Now will we stop following after the BLM sirens?

Posted by Restore-DC-Catholicism at 12:23 AM