Baltimore LGBT Ministry Being Run By A Practicing Gay

St Matthew's on Loch Raven Boulevard is by no means Baltimore's only parish to be headed to hell in a handbasket.  For a handy list of such parishes, we can thank (?) New Ways Ministry for its list of "LGBTQ-friendly parishes".  Of course we know that these parishes are on that list as they are reputed to be, in varying degrees, feeding their children scorpions when they need solid Catholic teaching and faithful administration of the Sacraments.

Of course St Matthew's is listed, but let's look at St. Ignatius in this post.  As expected from its name, it is a Jesuit-run parish, so that's one strike against it right then and there.  Like St Matthew's, this parish also has an unabashed presence during Baltimore's "pride parades".  We see that the parish has a LGBTQ "ministry" that they call "Embracing God's Gifts".    I wonder what they would call a ministry for serial rapists/murderers, but I digress!  Most of these groups are nothing more than mortal sinners and their enablers trying to justify their mortal sins to themselves and each others; and they probably also function as "dating services". 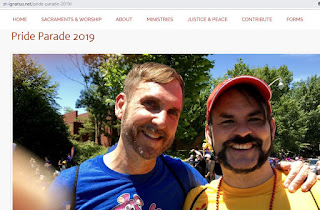 This group is under the direction of Gordon Creamer.  As one of his other endeavors, he created something called Mission Bridge.  He touts himself to be a "spiritual director" and Reiki practitioner.  The latter is thoroughly new age and thus heretical.  So is the Sisters of Bon Secours (where this Mission Bridge is headquartered)..  They are headquartered in Marriotsville MD.  Over ten years ago, when I was a board member of the Gabriel Network, we held a board meeting there, not knowing just what the place was.  I arrived at the meeting late and dashed into our meeting room, not having time to take in my surroundings.  After the meeting ended, we looked around and were aghast at what we saw: pamphlets touting the benefits of crystals and ashrams and of course, the labyrinth outside.  Needless to say, we never returned.  I digress again! 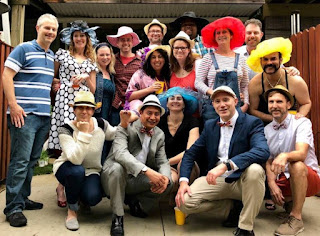 Now please take a look at the top picture.  This picture is from St Ignatius's page on the 2019 pride parade.  The other man is Brian Fitzek. A picture of him can be seen on his Linkedin page.  You can see the two of them together in the next picture from Fitzek's facebook page (right side).  By the way - isn't that outfit on Creamer just..special?  Interesting yellow fluffy hat and spaghetti straps, with his hand on Fitzek's shoulder!  But again I digress.

Below is an announcement of their "marriage" that ran in the October 16, 2014 edition of the Baltimore Sun (note the web reference at the bottom of the picture).  Consider that Creamer and Fitzek co-own their home, according to the MD Department of Assessments and Taxation.  These facts indicate that Creamer and Fitzek are in a sodomite relationship.  The important question is, does Father Casciotti know about this?  In fact, does he care?

We may well surmise that in his parish position of running this "embracing God's gifts" thing, Creamer is utterly unqualified to be promoting chastity to those afflicted with same-sex attractions.  The situation is not akin to a "wolf in sheep's clothing" but rather a "wolf in shepherd's clothing".  We should contact the parish here and suggest his removal.

While having this conversation with the parish, we might well ask them how it could be that they would allow such an obvious dissident to be in a prominent position in the parish.  If nothing else, Creamer seems to be quite open about his proclivities.  I don't for one second believe that they are so oblivious that they failed to notice that their parish was marching in gay parades.  The parish administration is most likely guilty of aiding and abetting sodomite sins and they need to be rebuked.  Quite frankly, I think they only way they will understand that is if the Sunday collection baskets are boycotted.