Election Dirt Being Uncovered, AP And USCCB Try To Help With Obfuscation

A statement from President Trump today:

“We all know why Joe Biden is rushing to falsely pose as the winner, and why his media allies are trying so hard to help him: they don’t want the truth to be exposed. The simple fact is this election is far from over. Joe Biden has not been certified as the winner of any states, let alone any of the highly contested states headed for mandatory recounts, or states where our campaign has valid and legitimate legal challenges that could determine the ultimate victor. In Pennsylvania, for example, our legal observers were not permitted meaningful access to watch the counting process. Legal votes decide who is president, not the news media.
“Beginning Monday, our campaign will start prosecuting our case in court to ensure election laws are fully upheld and the rightful winner is seated. The American People are entitled to an honest election: that means counting all legal ballots, and not counting any illegal ballots. This is the only way to ensure the public has full confidence in our election. It remains shocking that the Biden campaign refuses to agree with this basic principle and wants ballots counted even if they are fraudulent, manufactured, or cast by ineligible or deceased voters. Only a party engaged in wrongdoing would unlawfully keep observers out of the count room – and then fight in court to block their access.
“So what is Biden hiding? I will not rest until the American People have the honest vote count they deserve and that Democracy demands.”

Well, troubles abound in Michigan, one of the states that "mysteriously" switched from Trump to Biden.  First, we have the account of a ballot-count watcher, who witnessed two vehicles pull up and unload approximately 130,000 ballots.  They were all for Biden.  Every one of them was legitimately for Biden, and none for Trump?  No, that is a statistical impossiblility.  Go to that link and watch the video that the ballot-watcher took with her phone.

They also had, uh, "technical difficulties" with their voting machines.  The machines were run with software from Dominion Voting Systems.  It was discovered in Antrim County, and the votes had to be manually re-counted.  Thus, a county called for Biden, after a proper recount, went to Trump. 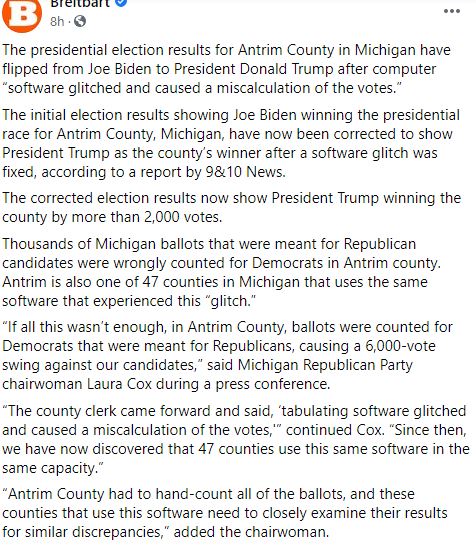 We can expect to see similar scenarios throughout the country, particularly in swing states. 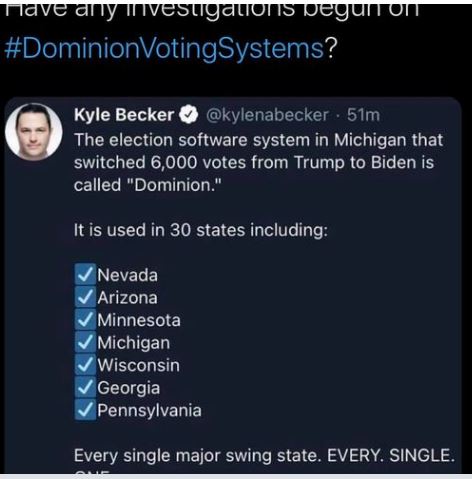 And just how, oh how, did Dominion Software come to be such a dominant feature in the tallying of US votes?  Why, from connections in high places, of course - and that includes connections to Nancy Pelosi herself.  But that's just a coincidence, right?  My, such a small world!  By the way - Detroit election officials were caught red-handed blocking the ballot-counting from legal observers; someone is obviously displeased he was caught on camera!

With all this coming to light, the progressives are rushing to declare Biden the victor, so any more irregularities discovered by Trump's team will look like he's tampering with the election (when he's merely exposing Democrat chicanery).  The AP today "called" the election for Biden, as did Fox News.  Many, including some easily duped conservatives, glommed onto these baseless pronouncements as though they were gospel-truth.  News flash!  The media does not have legal authority to make any official declarations regarding an election's outcome!  That should be obvious to someone with a basic knowledge of civics, but perhaps this is why public schools stopped teaching civics several decades ago.

Joining in this effort to do an "end-run" around the exposure of Democratic corruption is none other than the United States Conference of Catholic Bishops.  They have imperiously declared that Biden has enough votes and that he is the legitimate president-elect.  Nothing could be further from the truth - well, I take that back.  The USCCB, in that same declaration, claim that Biden is a "practicing Catholic".  Since when is an unabashed cheerleader for baby-slaughter and sexual perversions a "practicing Catholic"?  Is it because that is how many of them "practice Catholicism"?  They posted this pronouncement on their facebook page and received many well-deserved rebukes and denunciations.  Remember that when they try their annual shakedown for the Catholic Campaign for Human Development.

In the meantime, pray your rosaries.  Storm heaven that God have mercy on this country and that the large-scale deceptions be exposed and the real winner soon declared.

Posted by Restore-DC-Catholicism at 12:13 AM