The USCCB And The Great Reset

The US Catholic bishops, as a whole, never fail - to disappoint, that is.  The USCCB is holding its semi-annual meeting virtually.  We can be grateful that they aren't squandering thousands of Catholic dollars to flit off to swanky hotels, wine and dine to their content, and confab about all their latest progressive schemes.  Well, they are doing the latter virtually. 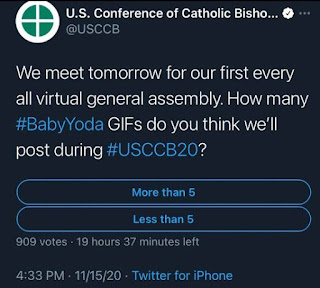 Earlier this week one of them put out the following tweet regarding this virtual gabfest.  Now what strikes you about this tweet?  One of my facebook friends remarked that the bishops aren't serious men.  I replied that they may not be men, period.  He agreed that I might have a point.  Upon further reflection, I think the cause for this tweet is a bit more ominous.  What they don't take seriously is the Sacrament of Holy Orders, with its attendant gifts and responsibilities to fulfill the charges laid upon them by Christ Himself.  I cannot say they don't take their vocations seriously because there is reason to doubt that many of them had authentic vocations at all.  Recall that Bella Dodd, stated that the Communist party deliberately set out to insinuate unsuitable guys (I won't call them men) into the priesthood and ultimately the episcopate with the stated goal of undermining Holy Mother Church.  No wonder they have no problem uttering such flippant statements.  The tweet has since been taken down after they received much understandable backlash.
A few days prior to that, Archbishop Gomez, president of the USCCB, congratulated Biden on his alleged "win".  Of course he's ignoring the obvious voter fraud and the subsequent legal challenges that Trump and his legal team are filing, acting falsely as though the media has constitutional authority to declare the winner of an election.
The case of Bishop Richard Stika of the Diocese of Knoxville, TN is rather curious.  Earlier, he had been chastising Biden for his support of baby-slaughter.  Now, however, he has changed his tune.  One could believe that a few of his "brother" bishops twisted his arm and told him to get with the program.  Well, he did.  He is calling on President Trump to concede defeat.  He even went so far as to cite the presidential election of 60 years ago, when Nixon conceded to Kennedy although it was clear that someone cheated on Kennedy's behalf and perhaps at Kennedy's request.  Apparently Stika claims that it's "love of country" to allow millions of Trump supporters to be disenfranchised of their right to vote.  The logic he espoused is so convoluted that it's clear that he's trying to justify his own cowardice in the face of those who are either blackmailing or bribing him to change his tone.
So it sure looks like the USCCB is clearly shilling for a Biden victory.  They are clearly on board the progressive global reset train.  I'm going to post below a podcast that Michael Hichborn of Lepanto Institute just did a few hours ago.  Please listen and pass this along.  This whole attempt to steal the election from Donald Trump - and the USCCB is on board with that - is greatly desired by the progressives, both in secular society and in the Vatican in order to move along their one-world-government reset.  Keep on praying your Rosaries.
Posted by Restore-DC-Catholicism at 9:10 PM