On Saturday October 26 in Crofton MD, an Anne Arundel County library hosted a "drag queen story hour" with the intention of normalizing perversion to children and, quite frankly, to groom them for later perversion.  This outrage did not go unanswered.  At least 60 or so faithful Catholics protested the misuse of our tax dollars to harm our children.  I was among that number.

We were at the library entrance.  The Crofton police and library personnel taped off the entrance.  That had the effect of splitting us into two groups.  Both sides are shown below, side by side.  We could still see and hear each other, which proved useful for the group Rosary and for an impromptu talk given by a priest in attendance. 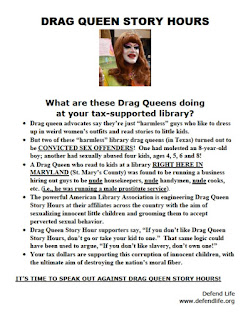 In the photo to the right, you'll notice the woman with the two signs conversing with another.  They were the two lone counter-protesters.  The woman to the far right is a library employee.  When one of our number was distributing the flyer shown on the right to people walking in, she tried to stop him by claiming that said distribution was "solicitation".  We of course know that is First Amendment speech.  Fortunately the Crofton police provided some on-the-spot remedial education to her regarding the Constitution.  The library security personnel were likewise disgruntled, but they too relearned some of the Constitution.

We prayed alound the Glorious Mysteries of the Rosary.  Afterwards, Father gave us some words of encouragement and exhortation.  I post that below.

I'm certain that we'll see more of these "story hours" in the progressive nut house known as Maryland.  Even though it's a liberal enclave there are still good faithful people here and the progressive agenda will meet with resistance.
Posted by Restore-DC-Catholicism at 9:05 PM