A few days ago, young men from the TFP Student Action group witnessed to the sanctity of life at George Washington University.  I would say that some of the students disagreed with them but that would be a gross understatement.  Instead, what you are witnessing is a visceral and violent reaction to truth on the part of those students who have partaken of the pro-abortion seduction, and who most likely have participated in baby-slaughter themselves.  Here is the video and further commentary is below that.

One of the broads there, who actually looks old enough to have retained some vestige of civility, demonstrated behavior associated with a rather dangerous animal.  I post pictures of both so that you can see the similarities. 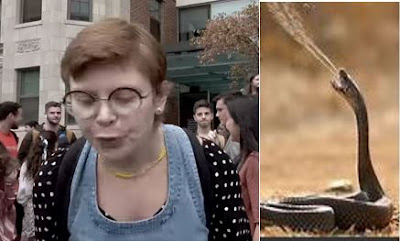 If some find my comparison offensive, well, consider how those young men found the behavior hurled at them.

The young men, in addition to speaking truth to George Washington University, are examples worthy of emulation by us all.  That isn't just their responsibility, but our's as well.
Posted by Restore-DC-Catholicism at 9:24 PM