Many remember that young gal who stood up at an AOC rally recently and who proclaimed that in the interests of "saving the planet", we need to start "eating babies".  While there is now talk that this gal may have been a plant by a fringe group run by Lyndon LaRouche, it is undeniable that AOC actually agreed with the gal's premise that the planet's future is in danger.  While the rest of the audience evinced some shock at the gal's remarks, AOC herself never denounced them.  She merely said that there are other means to advance envirowhackoism (although my phrasology wasn't hers').

Sounds far-fetched?  Consider that in a Stockholm summit last week, Swedish scientist Magnus Soderlund proposed that eating human flesh might be able to save the human race from climate change.  He then went on to complain about "conservative taboos", stating that we rubes might be "too selfish to live sustainably".

Now I link to a post I did three years ago on envirowackoism in the Church.  In that article is a link to a video done by Michael Voris that exposes how environmentalism has anti-life and idolatrous underpinnings.  Now I will link to another of my posts that features a light-show abomination played on the walls of St Peter's Basilica.  Remember that?  The purpose of that descecration was to usher in that "year of mercy".

Now consider what happened in the Vatican gardens yesterday, with that undisguised idol worship, witnessed and approved by the pope.  Consider it especially in the context of what I mentioned in the preceding paragraphs.   Now bear in mind some of the virulent anti-life proponents invited to this Sham-azon Sin-nod  The Church will be injected with idolatrous anti-life poisons to its most likely deformation.

Meanwhile, back in the Archdiocese of Washington, local Catholics are being brainwashed prepared for this "newness of the Spirit".  Poor pope!  Someone forgot to remind him that the Spirit, being the Third Person of the Blessed Trinity, is eternal and perfect. He cannot change.  The commands He issued hundreds of years ago likewise will not change.

The "preparation" is evident in the October 3rd edition of the Catholic Standard and (from the little Spanish that I know) its sister publication, El Pregonero.  By the way; there is a lot of lunacy in this issue of the Standard, but I'll deal with that in another post.  Here we see the Catholic Standard waxing chipper about local Catholic school students participating in the September 20th Climate Strike.   A teacher from St Elizabeth Seton High School is quoted as saying that they were "following the pope's example".  He's quite correct on that; the problem is that the pope's example is horrible.   Will they soon be kneeling before pagan idols in the school auditorium?  But I digress. 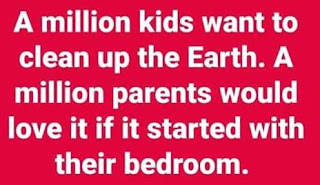 The students chanted the usual banal slogans.  Did they think about what they were doing?  For instance, Florence Kane from Georgetown Visitation wore a T-shirt that said "No More Fossil Fuels".  Is Ms. Kane accordingly prepared to give up any idea of owning a car?  Then there's this gem: "Hey hey, ho ho, climate change has got to go".  So change of seasons is now evil?   They also had to endure listen to Greta Thunberg, the rather loud Swedsh teen who is being exploited by the "climate change" junk-science proponents; in doing so, they only enabled her exploiters. 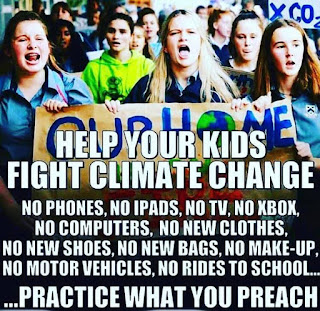 Now let's take a look at that outfit behind the September 20th escapade.  Of course they have a list of partners.  On that list you can find all manners of Soros-funded and/or Alinsky-originated leftist outfits.  Many of those support the gay agenda and the abortion agenda.  But speaking of the latter, recall the Swedish scientist Soderlund who proposes the eating of human flesh.

The article ends with the kids declaring themselves to be the "Laudato Si generation".  What's wrong with being faithful Catholics? We are mindful of our duties to be faithful stewards of creation, but we also recognize that creation exists in service of mankind, not as a peer of mankind.  The parents of all these hoodwinked students should be outraged that their students were gyped out of a day's worth of actual schooling so that they could be used as agitprops for an earth-worship, socialist-driven agenda.  The teachers of those schools and the staff of the Standard should hang their heads in shame for promoting such drivel and being puppets of those progressives.
Posted by Restore-DC-Catholicism at 4:02 PM