Earlier this week, from a naval base in the state of Washington, the air crew of an electronic warfare plane took their plane into the skies above Okanogan and with their plane contrails, drew a picture of male genitals.  It appears that naval officials handled it well.  They have grounded the crew and issued an apology, stating (among other things) "sophomoric and immature antics of a sexual nature have no place in naval aviation today".  I do hope that the crew does incur some significant discipline.

What I find disappointing, though, are the equally sophomoric reactions that I see among those who call themselves conservative and even Catholic.  One facebook page is owned by a woman who is a secular Carmelite.  She posted a joke about it.  I asked her what was the point of the vulgar jokes and was mocked as a prude by her and others.  I was not the only one to take objection to that post.  I decided to unfriend her.  But really!  What would impel a professed religious to joke about such obscenities?  What would impel other commenters (Catholics, I'd presume) to chortle right along with her?

One secular-conservative facebook page has quite a discussion going on; I got a glimpse into the page owner's mindset when I noticed that his page title contains vulgarities.  I'll share one very telling screen shot. 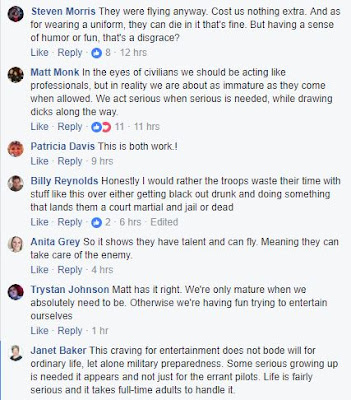 Notice how several of the commenters seem to revel in the idea of acting immature as opposed to embracing maturity.  They all seem to be suffering from "peter pan syndrome".  They seem to think they can put on their "adulthood" when emergencies occur, not accepting the fact that no virtue will come to play when vice has been allowed to dominate.  While the shot was taken from the secular page, but I think the same can be said for those on the Catholic page as well.

Now notice to the left, the second from bottom comment.  He states that when "we don't need to be mature (an obvious denial of reality)" he is engaged in a never-ending quest for "entertainment".

There are many facets to this idolatry of entertainment.  However, my focus will be on that implied by the title of this post.  Immorality and immaturity feed off one another.  How many progressive pro-aborts are now dependent upon the state for their sustenance?   How many do we see who cannot countenance being exposed to opinions other than their own, without rioting and/or scurrying for their "safe spaces"?

Just as in the final days of the Roman Empire, pagans sacrificed their souls and minds for the sake of "bread and circus".  As seen on the page of my former Facebook friend, many who call themselves Catholic are at least sympathetic to this pursuit.  They fail - or refuse - to see that "maturity" is simply the disciplined and constant practice of virtues.  To engage in "immaturity" is to cease virtue and to become enslaved to vice.  So now we have people pursuing the latest entertainment systems, plopping themselves in front of the tv, etc, and of course engaging in sexual immorality (and yes, that air-drawing stunt was sexual immorality) and abortions and generally acting like overgrown adolescents.  The commenter who seems to think that we can be mature "when we absolutely need to be" is simply deceiving himself; if he doesn't practice the virtues that come with maturity in his routine life, he'll have no spiritual and moral fortitude to be virtuous in times of crisis.

We of course understand that real maturity and virtue and grace will arise from our prayer, frequenting the sacraments and discipline in practicing virtue.

Comments?
Posted by Restore-DC-Catholicism at 6:42 PM