Why Republicans And Democrats Can't Be Pals 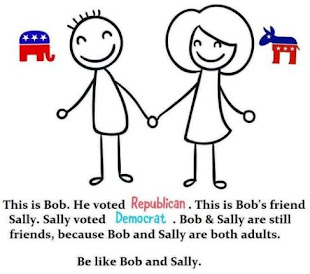 A few days ago, I saw the attached meme on the facebook wall of a friend of mine, a staunch pro-lifer.  I believe the message of the meme is false and is, at best, based on wishful thinking and not reality.

At one time, perhaps fifty years ago, the meme would have reflected reality.  But that was a time when both major parties adhered to Christian standards of morality.  Any political differences were relatively minor.  At no time would a sane person have approved of the routine murders of thousands of babies every day.

Flash-forward to today.  Consider that the meme says "Sally voted Democrat".  By voting Democrat, Sally voted also for the party platform that unabashedly promotes the whole-scale slaughter of tiny children.  The Democrat party embraces other grave evils such as various homosexual perversions, curtailment of religious freedoms, etc.   The Republican platform touts the protection of unborn children and Christian morality concerning marriage, religious freedoms, Second Amendment, etc.  Perhaps individual Republicans are remiss on their adherence to those party ideals, but that does not invalidate the ideals themselves.

When it comes to Democrat versus Republican goals and ideals, what we literally have is the difference between evil and good (respectively).  There is no way that good and evil can be united.  It should be recalled that a person's politics is merely how they implement their core beliefs in the public arena.  In that case, not only is division inevitable, but division is absolutely necessary.

Does that mean that good people must treat Democrats with aversion and disrespect?  Not at all!  Precisely because we are Christians, we treat all with respect that is due to them as human beings created by God in His image and likeness.  Many Democrats do not reciprocate.  Witness the BLM and Antifa riots transpiring now.  Witness the shooting of the Patriot Prayer man in Portland a few days ago.  Aberrations?   Not at all!  Such violence is merely a logical extension of their God-hating political philosophies.

What it does mean is that it would be utterly foolhardy to take such a person into their confidence, knowing that this person is - at best - indifferent to the plight of the babies.  Upon what would any such friendship be based?  I am not suggesting that we should shun such people who are in our lives.  I am saying that we must be wary of them, knowing that their beliefs will permeate everything they say and do, just as our convictions determine our actions.

We must pray and work for their conversion.  We must also not pretend that unity with them exists when it doesn't.  If they are politically active for anti-God candidates, we must face the fact that we must defeat them.  We must also be careful not to fall into the "common ground" booby-trap, for their can be no "common ground" with proponents of baby-killers.  Quite often this "common ground" is "social justice" gobblygoop.  I am aware of two instances where two former pro-life leaders fell into that trap and are now currently undermining pro-life efforts. Here's one.

I know it is difficult when relatives embrace child-killing.  Again, I remain polite and cordial, but don't pretend that I can take them into my confidence.  We need to be prudent and true first to Our Lord Jesus Christ.

Posted by Restore-DC-Catholicism at 11:06 PM