Electronic Graffiti On Basilica Of The Immaculate Conception 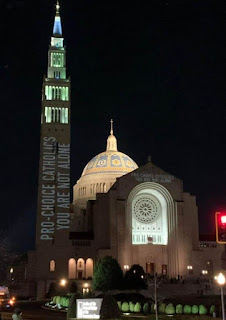 On the eve of the National March for Life, a Mass for Life is usually held in the main part of the Basilica of the Immaculate Conception on Michigan Avenue NE, Washington DC.  Such was the case this past Friday night.

Taking a cue from the Vatican City abomination of six years ago, "Katholycs for a Free Choice" decided to do something similar to the Basilica.  They did, as you see to the right.

Now I won't react in shock and horror at what they did to the Basilica.  That's simply the nature of the nonsense in which they engage.  I really don't know how they thought that this little stunt was going to advance their cause, such as that cause is.

Rather, I am mystified.  Consider that the "katholycs" had to set up their projectors, probably lugging their gadgets from their cars.  Then they had to make sure that their aim was correct and everything in focus, and they did all this in the dark.  So where, oh where, was the Basilica security staff while all this was going on?  Did they lack the guts to confront the "katholics for free choice"?  Well, given the way in which they molested George Neumayr several years ago AND the fact that some of them have actual criminal records, I find that hard to believe.  Were they given orders to stand down and "let the show go on", as it were?

If anyone has further information on what happened that night, and how it was allowed to happen, please reply in the comments section.  I suspect we'll never know the answer to these questions that they were probably hoping would never be asked.

Posted by Restore-DC-Catholicism at 8:46 PM

Email ThisBlogThis!Share to TwitterShare to FacebookShare to Pinterest
Labels: Basilica of the Immaculate Conception, Catholics for a Free Choice, March for Life, Mass for Life