Mark Houck is a pro-life activist in Pennsylvania and the founder/president of the King’s Men (see thekingsmen.org) He has been going to the Planned Parenthood mill known as the Elizabeth Blackwell Health Center in Philadelphia every Wednesday for four hours.  On October 15, 2021, Houck was there with his young son and another prayer partner.  A male deathscort, 72 years old, was there to rush women inside the mill so that their babies could be killed.

The deathscort took some time to harass the young Houck boy.  Mark repeatedly told the deathscort to stop harassing his son.  The boy walked down to a corner and the deathscort followed him.  Houck pushed the deathscort away from his boy.  At that, the deathscort pulled a dramatic flop scene then rushed into the mill.  All this was recorded by Planned Parenthood’s security cameras.  Soon thereafter Houck got served with papers.  The following winter, there were three different court dates.  For the first one, the pro-life attorney couldn’t be there.  The next date the pro-abort attorney didn’t show.  The judge then said if the pro-aborts didn’t show for the third date, that he would throw the case out.  The deathscort himself failed to show so the case was indeed thrown out.

That should have been the end of it, but the Department of Justice got involved.  They were looking for a possible FACE violation.  The video taken by Planned Parenthood showed that to be nonsensical.  Pro-life attorneys have a copy of said video.  Moreover, the attached Google-Earth picture also makes a lie of the FACE charge.  Any possible corner where the altercation took place is far enough from the mill entrance to render a FACE charge farcical on its face. 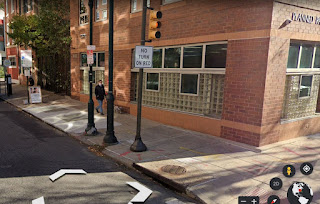 That didn’t stop the ever-intrepid feds from borrowing tactics from the Nazi Gestapo and springing into action, as it were.  On Friday, September 23, in the morning at 7:00 AM, 20-25 armed men barged into the Houck residence.  They dragged Houck out in handcuffs in front of his wife and children.  They took him to the Federal Detention Center at 6th and Market and arraigned him.  They put him in handcuffs and leg shackles.  They chained him to a table for four hours.  Afterwards they let him out on his own recognizance.

If any of this sounds vaguely familiar, it should.  Recall this post from five months ago.  Refresh your memories regarding the pro-life activists who engaged in a rescue at the DC mill of Cesare Santangelo on Oct 20, 2020.  Armed agents of the Department of Justice burst into the homes of these pro-lifers, also in the wee hours of the morning.  They too were let go after putting them through a harangue.

At the time of this writing, legal strategies are still being weighed and considered.  Obviously, this is a breaking situation so we’ll advise as is deemed best.

Posted by Restore-DC-Catholicism at 10:09 PM