Refuting Attempts To Discredit The Mass Of The Ages

Over a month ago, three theologians, Drs. Mary Healy and John Cavadini, with Father Thomas Weinandy, wrote a series of articles that appeared in Church Life Journal.  I haven't read all the articles, but what I read seems to be an attempt at justifying the heavy-handedness of Francis' Traditionis Custodes.  I'm not going into all the detail of the errors here.  Two other theologians, Drs Joseph Shaw and Peter Kwasniewski, have done an excellent job.  I suggest that all links be read, even the links contained in the linked articles.

I am not acquainted with Dr. Cavadini, but am with Dr. Healy and Father Weinandy, although it's been quite a few years since I've seen either of them.  That acquaintance goes back to our days in the Mother of God Community, a group that was part of the so-called "charismatic renewal" that fell under scrutiny owing to cultish behaviors on the part of the leadership in the early 1990s.  I parted ways with that group at that time.  A major reason for my departure was the overemphasis on personal experience over adherence to Catholic doctrine.  The Novus Ordo Mass is geared to personal experience whereas the Traditional Latin Mass is geared towards worship of God exclusively.

That last word "exclusively" is key.  You'll not find sloppy dress nor conduct in a church dedicated to the Traditional Latin Mass.  Women dress decently and modestly: no exposed body parts, cloths modest and in good repair.  Similarly, men are not dressed as though they were just in a drunken brawl: no jeans, tee-shirts but lots of suits and ties.  Before and after Mass in the nave of the church, there is no chit-chat going on between adults.  One might hear the occasional cooing of babies.  Speaking of which, there are many young families with many children at at Traditional Latin Mass, more so than at a Novus Ordo. 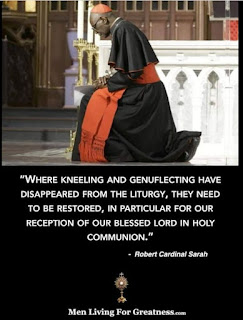 Some faithful and courageous prelates are not taking this attack on the Latin Mass lying down.  Archbishop Vigano penned an open letter to another Italian bishop, taking him to task for his senseless quashing of the Latin Mass.  There have been others.  As I track them down, I will repost.

Posted by Restore-DC-Catholicism at 11:12 AM