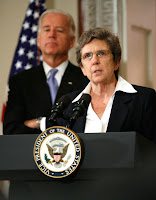 Sister Carol Keehan is the president of the "Catholyc" Health Association: the same bunch of pseudo-nuns and other dissidents who lobbied for the Obama Hell Bill that was just signed into law.  Her statements were so egregious that even the USCCB took umbrage at them.

So what was her reward?  Was it a bucketload of money for the CHA?  Even Stupak got to bring home some airport-grant bacon for all his troubles!  So what is this most coveted prize for which Sister sold her soul?   (drum roll, please!)

A pen!
Yep!  Sister received one of the pens that the Messiah Most Miserable used to sign the Hell Care Mess.  It's a bit like receiving one of the whips used to scourge Jesus.  In a sense, that's very accurate, for Sister helped to facilitate the murders of babies and the infirm as she plugged for the bill.  She did this for a pen?  As I read somewhere, at least Sir Richard Rich received control of Wales when he betrayed St Thomas More.  She did it for a pen!

Here's an idea for a tee-shirt for Sister to wear (since she doesn't wear a habit).  "I denied my God, betrayed my Church and broke my vows - and all I got was this lousy pen!"
Posted by Restore-DC-Catholicism at 8:20 PM