Yesterday I stated that those involved in the retrieval of the babies murdered by Santangelo would hold a press conference.  They have done so, and here it is. 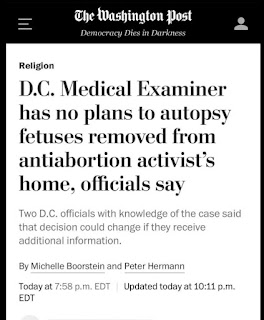 Frankly, the audio leaves something to be desired - volume, to be precise.  But listen closely for what is said is crucial.  In the first few minutes, Terrisa Bukovinac, founder of Progressive Anti-Abortion Uprising (PAAU) gives a chronology of the events of last week.  She was with Lauren Handy on Mrch 25 outside of Santangelo's abortuary when the Curtis Bay driver let them take the box of babies that were on their way to being burned in an incinerator.

After that, nothing said was that much of a surprise.  The facts made quite obvious that the DC police and Department of Justice were colluding to prevent any examination of the 3rd-trimester babies who seemed to have been murdered by means forbidden by Federal law.

That collusion has by no means escaped the notice of several GOP lawmakers.  Led by James Lankford and Jim Jordon, the lawmakers are demanding that Mayor Bowser and the Department of Justice do their duties.  It's a pity that no Democrat lawmakers signed onto this letter, but they are only abiding by the pro-abortion plank of their party of death and mayhem.

John-Henry Weston of LifeSiteNews engaged in an interview with Lauren Handy regarding these recent events.  Read and listen https://www.lifesitenews.com/blogs/exclusive-pro-life-hero-raided-by-fbi-speaks-about-the-aborted-babies-she-was-trying-to-honor

Posted by Restore-DC-Catholicism at 10:44 PM