Our Picket Of Carafem Last Week

As announced in this post, we picketed Montgomery County's newest "abortion spa".  It was designed by pro-aborts to "take the stigma from abortion".  That's purely wishful thinking on their part, for there will always be stigma to heinous evils such as baby-murder. 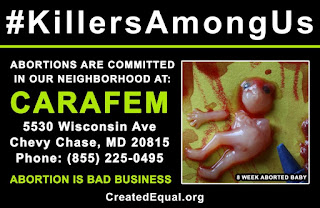 On Saturday morning, May 23, we were in front of 5530 Wisconsin Avenue in Chevy Chase, displaying pictures of abortion victims and distributing informative post cards as you see to the right.  Earlier in the week, we had been informed that the mill would be open.  Later in the week, closer to the time of our picket, we were informed that they had decided to close for the day.  Indeed we saw no one enter the building.  That in and of itself proved the worth of our effort, for on that day no babies were slaughtered at Carafem.  Who knows how many children we were able save just by us being there?  That doesn't even count the people passing on the sidewalk who may silently have been contemplating abortion.

More details and pictures of the event are below the jump break, so, 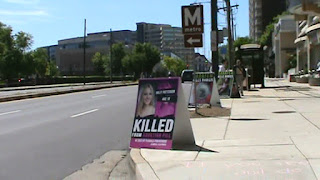 We stood along the street with our signs.  Many cars slowed down to take in our pictures.  No doubt this is the first that many have seen of the truth of abortion.  So many, being products of our progressive education system, were told that the unborn child is merely "tissue" and not a person.  Now they have other information to ponder. 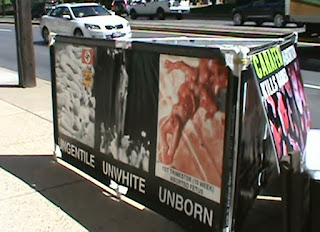 Pedestrians too were given food for thought, although the great majority of them just hurried by us without saying a word.  Their eyes, though, artifically focused straight ahead, bore evidence that they were confronted with the truth.  Please bear in mind that southern Montgomery County is an area that is heavily pro-abortion.


Here are some shots from across the street. 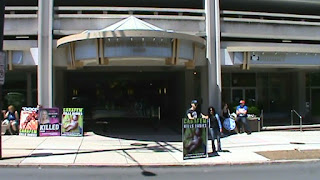 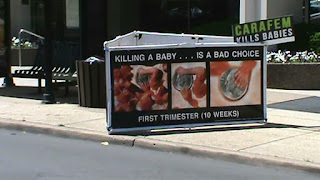 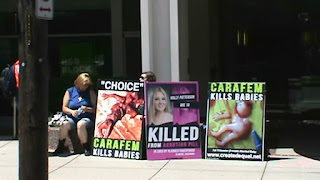 This picket was merely the first step to remind people that abortion is baby-murder, not a trip to a relaxing spa.  There will be future actions.

Posted by Restore-DC-Catholicism at 11:07 AM