Carhart Cancelled His Appointments Today - Why?

Recall that Operation Rescue discovered this past weekend that Carhart did not obtain the required license for his new hell-hole.  We knew that it would be impossible to obtain that license.  How could the place pass inspection when it was still being renovated? 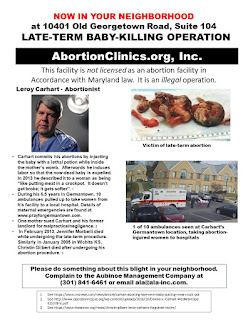 We can understand how Carhart might have difficulties in getting a license - especially in light of this.  Perhaps he doesn't think it's any big deal whether or not his place has a license, as some of his employees - particularly people who also came from Nebraska - have had their licensing woes, too.

Many of us noised abroad this lack of proper certification for this new mill.  Other area businesses were leafleted, as was the surrounding neighborhood.  The latter received the flyer on the right.  We all suggested that they call the landlords to complain.  Perhaps it was they who forbade Carhart from starting the baby-slaughter, if they were understandably concerned that they might be held liable if they allowed an unlicensed facility to operate on their premises.  Or perhaps Carhart himself had an unusual flicker of common sense, seeing that he was caught "with his hand in the cookie jar", as it were.  Whatever the cause, we rejoice that at least for a few days, babies are given a reprieve and we pray that their mothers never reschedule.

As I mentioned Sunday, two events happened today.  The first was a press conference at 12 noon, attended by over 200 people.  The video appears below.  The second was a prayer vigil at 6:30pm, attended by 25-30 people, myself included.  I will have that video up tomorrow evening.  If you're in this area, please visit www.prayforbethesda.com to join our efforts in ridding our state of this barbaric practice.

Posted by Restore-DC-Catholicism at 11:03 PM