More To Las Vegas Massacre Than Meets The Eye 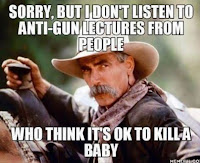 As I said in the previous post, the liberal screeching for more "gun-control" is in full swing.  One individual on facebook opined that "no, we don't need a thorough investigation" (his exact words), that we simply needed to restrict/ban guns.  I checked his wall and the meme #Istandwithplannedparenthood is right there.  He's pro-baby-murder, making a sham of any moral credibility that he was trying to claim.

I replied that we do, and others are, too.  There are many strange things about the circumstances surrounding Paddock and the shooting itself.  I won't rehash the points all these articles bring to light.  Here are thoughts of Allen West, former army officer and presidential candidate.  Other questions are stated here, here, here.

I link now to an article by George Neumayr regarding the intellectual vacuity of the "gun-control" argument.  I too think that gun-control is just one step of the progressive goal to strip people of their identities as moral, free Christians and to transform us into docile minions of the "benevolent" nanny-state tyranny.  Other steps include:
They see the Las Vegas massacre as a most opportune excuse to cram through their agenda.  Will we allow them to do so?  We must continue to pray, to speak out, to ask probing questions.
Posted by Restore-DC-Catholicism at 9:08 PM