Cardinal Gerhard Muller first made mention of this when he expressed dismay over the Masons' praise of the pope's fascination with "fraternity".  He stated quite frankly and directly that "a universal religion does not exist".  He's absolutely correct.  There is the Catholic Church, the One True Church.  All others, while they may adhere to varying segments of truth, do not possess it in its fullness.  They do not possess the sacraments, unity with the Chair of Peter and were not instituted by Jesus Christ to lead people to salvation - as was the Catholic Church. 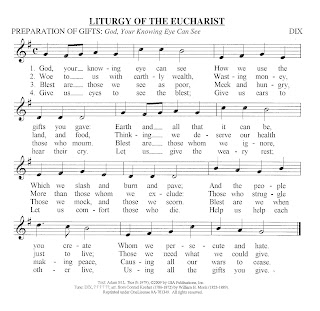 Michael Matt, in the video that appears at the bottom of this post, makes similar points regarding the heresy that Francis committed when he signed the "Human Fraternity Document".  Before we look at that, I'd like to examine the Offertory Song for today's Mass.  I would not sing it.  When I looked at the verses, I couldn't help but notice the environmental idolatry in the piece of the song that bewailed the "slashing and burning and paving".  I also noticed that the word "God" was mentioned once - that's it!  The rest of the song focused only on earthly life - not on anything of eternal consequence.

I decided to research the author (Adam Tice).  I found that he is a Mennonite.  His twitter page reveals that his music is indeed focused on earthly life and not on eternal salvation.  I don't know enough about Mennonite thought to know whether or not he's in keeping with their beliefs, but it doesn't matter.  The music, as it is, is not fit for Catholic consumption.  Mind you, I've seen far worse, but it is what it is.  Here it is to the right.

Now please pay close attention to what Matt has to say.  He makes a compelling case for the understanding that the heresy committed last week was a logical outcome of the "spirit of Vatican II".  I remember that mess in Fatima 33 years ago.  Pope John Paul II's kissing of the Koran was inexcusable.  So too is the prattling about the "new world order".  That is masonic talk.  We saw a glaring example of that with Francis last week.  At my church today we saw a small, barely noticeable example there.  Probably these small, seemingly insignificant examples abound, and they are so small that we don't notice them and they slip into our thinking without us being aware of their influence.  In addition to the prayer suggested by Matt, we need to keep our ears and eyes wide open.

Posted by Restore-DC-Catholicism at 7:52 PM