Pope Francis, We MUST, On Pain Of Sin, Avoid Even The Appearance Of Communism

Pope Francis, this past Monday, claimed that Christians shy from the "social gospel" because they fear that the Church will look like the Communist Party.  Of course he is trying to cajole Catholics into disregarding their common sense so that they will indeed swallow the "social gospel" crap - and eventually socialism, if not outright communism. 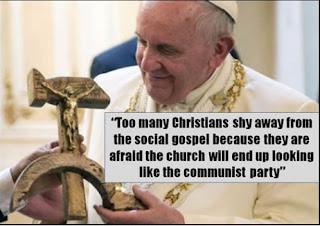 In light of these shameless attempts by the pope and other quasi-socialists to induce false shame into us, we must stand strong and call them out for what they are.  Here are just a few facts about this "social gospel". He is a big fan of Dorothy Day and her Catholic Worker Movement.  I don't know just what Day's original intent was for the CWM, but it has veered into socialism and dissidence.  From this page of the DC affiliate, we see that they have allowed disgraced Bishop Thomas Gumbleton to speak at their events, as well as some Pax Christi individuals.  Of course, rabidly pro-abortion Jeffrey Sachs was often invited to the Vatican to craft Laudato Si, a thinly-disguided apology for socialism, as well as population-control and climate-change junk science.

In 1984, Pope John Paul II suspended a divinis the priestly faculties of Fr. Ernesto Cardenal, when the latter held a cabinet position in Nicaragua's Sandinista government.  Cardenal had always been a Marxist involved in "liberation theology".  Pope Francis lifted the suspension.  He noted that Cardenal accepted the suspension, but there was no mention of Cardenal seeing the errors of his Marxist and liberation theology mindsets.  In this and his various document, the pope displays an untoward affinity for socialism and even communism.

Previous popes have proclaimed quite different things about socialism and communism.  They are worth a study.  They emphatically declare those philosophies to be inherently evil.  So should Christians shy away from appearing to be communists, even if they aren't - for now?  Absolutely.  1 Thessalonians 5:22 is adamant about avoiding the appearance of evil - and that is what communism is.  The so-called social gospel is a spiritual and moral booby-trap.
Posted by Restore-DC-Catholicism at 5:28 PM