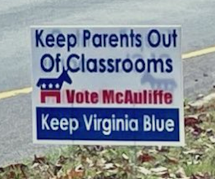 Pictures of a yard sign have been surfacing on social media; one is to the right.  This one has been debunked as a hoax, but from the clip below, we see that it might as well be true. (Note to self: if ever I run for public office, make sure I don't tick off parent-voters by telling them they have no say regarding their children's education.)

As the whole nation knows by now, Terry McAuliffe, Democrat party hack and a pro-abortion faux-katholyc, has been defeated by Republican Glenn Youngkin in the race for Virginia governor.  This is the first time in 12 years that a Republican took the helm in VA.  Moreover, the Lieutenant Governor and Attorney General will now be Republicans, also, and the VA House has reverted to GOP control.  This upset victory for decent people is seen on both sides as a rebuke of the Biden administration and its incessant bungling.

I must admit that I thought it was a long shot, with all the cheating that happened last year.  But enough good people had enough.  No doubt the situation with the Loudon County School Board woke some people up.  That effect was felt not only in VA but all over the country.

Most of all, I think that the prayers of Christians, particularly the Rosary prayed by Catholics, played a pivotal role this past Tuesday night.  However, this has to be only the beginning.  We need to redouble our efforts to see reform not only on the political front, but in our everyday lives.  To paraphrase St Teresa of Avila (with some minor editing) vote as if it all depended on your vote and pray as it all depends on God.