I and a number of others had reason to visit Chicago. This morning we attended the 7:15 am Mass at the above-named church. It is staffed by Franciscans and one said the Mass.

The Gospel for today was the same one for this past Sunday, where Our Lord tells His disciples not to silence anyone who speaks in His name. Well, the priest took this to mean that we must not be "arrogant" and insinuate that "our truth is the right truth". Does anyone recognize the heresy of indifferentism here? How about the lack of simple logic?
Let's illustrate the lack of logic. Say I make the following statement. "There is no truth." Now think about that for a minute and you'll see the paradox. If indeed there is no truth as the statement above claims, that means the statement itself is true. Therefore there must be at least one truth - but then the statement becomes false. Dear readers, this isn't some clever little play on irony. This is proof positive that there does exist objective truth, and that the denial of that basic fact is ridiculous on its face.
We then went to Holy Communion. I receive on the tongue. I could tell that Father was rather reluctant to give the Host to me, but He did. One of my companions made the same observation when she received from him. 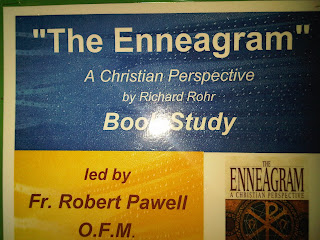 After Mass, we saw this flyer on the bulletin board in the lobby. We weren't surprised. The enneagram is a device based on New Age heresy. Richard Rohr, to the best of my recollection, is another Franciscan priest; why the flyer doesn't acknowledge his priesthood is beyond me. At any rate, Father Rohr is heavily steeped in New Age glop.
Chicago is the (reputed) hometown of the Messiah Most Miserable, the Lord Barack Hussein Obama himself. After seeing a church such as this, we can understand how Chicago Catholics were so muddle-brained as to vote for Obama. (Note to all the salivating lawyers out there. This blog and its owner-organization are NOT 501c3 corporations. Therefore, we can make any political-type of statement that we please.) Let's pray that God will break through the obvious confusion and rebellion that exists in such parishes.
Posted by Restore-DC-Catholicism at 11:07 PM