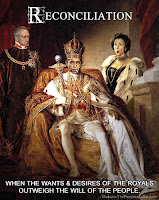 Goodness!  We have yet another egregious breach of the "wall between church and state".  Church leaders are being asked to shamelessly take partisan positions and to urge the same upon their congregations!  So let's hurry up and get the ACLU on this immediately!

And just what may this blatant breach be?

From the Catholic News Agency (and thanks to An Archdiocese of Washington DC Catholic), we read that Messiah Most Miserable and his Minions Most Mediocre are "rallying religious leaders to spread the word on new health care legislation to reinforce public support and to raise awareness about the effects of new insurance reforms."  And there's more!  "President Obama told faith leaders to treat the new law as settled fact and to use their influence to convey that message to congregants."

Permit me to paraphrase - or, if you will, to divine what the Teleprompter really said.  "Got that??  It's settled fact!  No more opposition allowed!  Make damned certain your congregations accept that!  Do you hear me??  Now fall in line!"

He then goes on to say that "the debate is over".  Well obviously he's doing all he can to ignore the results of the elections so far.  This matter is far from over.  We're not going to rest until the Hell Bill is consigned to the dung heap of history.  Remember when Roe v Wade was decided?  They tried to say that the decision settled abortion - famous last words!

By the way - I was just kidding about the ACLU!  We all know their double-standards.  If church leaders are being asked to espouse politically correct immorality or progressive positions, they look the other way.  But had a priest dared to preach against voting for pro-abortion candidates, the ACLU would have been stomping into his church the next day demanding his ouster.

Important note to Republicans  This is not just an Obama-fiasco.  Bush laid the groundwork for this mess when he led the charge for this "faith-based group partnership".  It was unconstitutional from the get-go, and it created the infrastructure that the forces of death are now using.  I was called a nay-sayer by some pro-lifers because I knew this would be a snake-in-the-grass.  Now, voila!  Can we learn some lessons here?
Posted by Restore-DC-Catholicism at 9:13 PM