After the pro-life reminder described in my previous post, this one was my personal favorite. 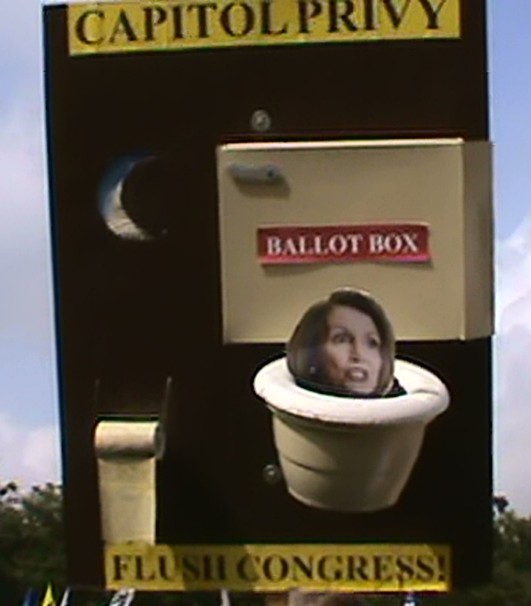 Let this serve as a prophetic statement as to what will happen to the careers of those who promote the murders of the tiny unborn children, general corruption of morals and national rejection of the Triune God.
Ladies and gentlemen, vote.  After that, never, ever, let yourselves lapse into ignorance and apathy.  One thing that I heard more than once that day was how "awakened" people were, now that the country is headed down that device that's depicted above.  They weren't involved before, but now they're "gung ho".
Well, that's nice.  But what were they thinking before these personal epiphanies?  Perhaps a better question is "were they thinking at all"?  In all these testimonies, no one acknowledged that a cause of the national malaise was the general apathetic state in which they wallowed.  Such lack of admission causes me to fear a bit that once Obama's defeated, that they'll just slide back into mental oblivion - and spiritual oblivion too, for that matter.
"The price of liberty is eternal vigilance".  Note that word "eternal".  That means our watchfulness cannot be relaxed for one iota of a second.  We must constantly watch, pray and work.  While we are on this side of the grave, we are the Church Militant - not the "church mellow", but the Church Militant.
Posted by Restore-DC-Catholicism at 10:04 PM